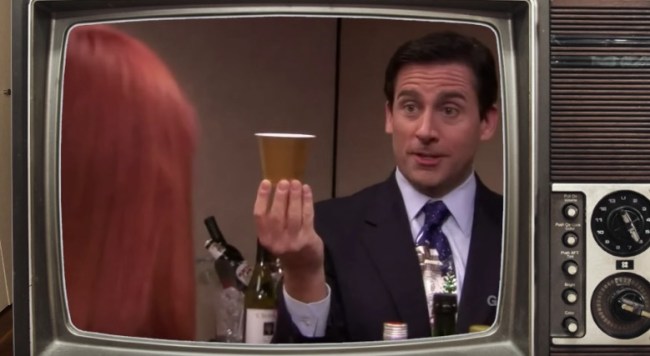 I never thought that we’d be talking about The Office in 2018 as frequently as we are these days but then again I never expected that NBC would bring the series back for a reboot. News of NBC reviving The Office spread like wildfire last month. However, there’s also a lot of speculation that NBC will bring the show back with a new cast.

Everywhere I turn I see The Office. There are approximately 3.38 billion memes on Instagram about watching reruns of The Office. Last night, when I started flipping channels after the NFL games I found there was a marathon of The Office episodes over on Comedy Central. Then today, I come across this recipe of the ‘One of Everything’ made by Michael Scott in the Christmas episode of Season 5.

The ‘One of Everything’ is Michael Scott’s attempt at a Long Island Iced Tea. It’s pretty much a cocktail that anyone without any prior mixology experience would try and make by pouring together everything in the front row of a bar. But that doesn’t necessarily mean the cocktail’s rubbish, does it? Just because the ingredients don’t sound great on paper it doesn’t mean they won’t be awesome….But, it doesn’t actually seem pretty great after they make it and taste test, does it? Thankfully for all you bros, Cocktail Chemistry Lab provides a vastly improved version of this cocktail that you can make at home, a jacked up Long Island Iced Tea recipe which you should commit to memory.