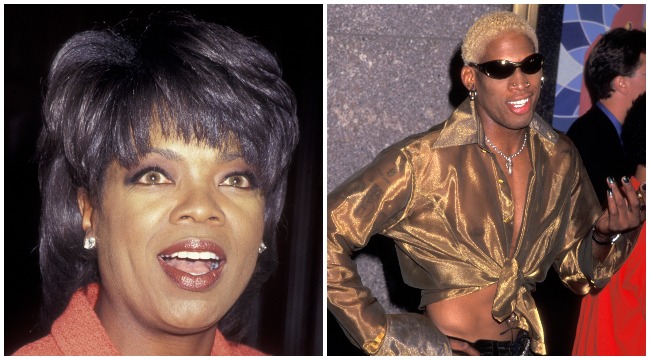 Trying to define Dennis Rodman is like trying to mop the ocean. The truest definition of Dennis is that he is undefinable. A walking and thrusting enigma.

We’re talking about the dude who’s had three wives but also invites a teammate and his wife on a double date to a gay bar. The guy refused to go down on the Queen of Pop, but had sex with Carmen Electra on half-court of the Bulls practice facility. The beauty of Dennis Rodman.

In a resurfaced video from 1996, Oprah made the mistake of trying to put the cross-dressing NBA champion in a box. Or maybe just the opposite.

The clip has since gone viral for Oprah incessantly questioning Rodman about his sexuality after he admitted to having some form of attraction to men, but calls himself only “mentally bisexual” because he has not acted on it.

Oprah repeatedly asking and intimidating Dennis Rodman about his sexuality. This was extremely toxic femininity pic.twitter.com/x5NFPHLpFf

Oprah does everything in this interview but ask to sniff Rodman’s hog. I know the times were a bit different, but sheesh Oprah, let the man live.

Oprah’s thirst for this knowledge inspired some pretty hilarious responses.

Oprah after asking Dennis Rodman if he’s gay for the 100th time pic.twitter.com/rg8lHcgiZi

This is what Oprah really wanted to say to Dennis Rodman pic.twitter.com/wBFpBrzMhu

Oprah finding herself on the wrong side of history.