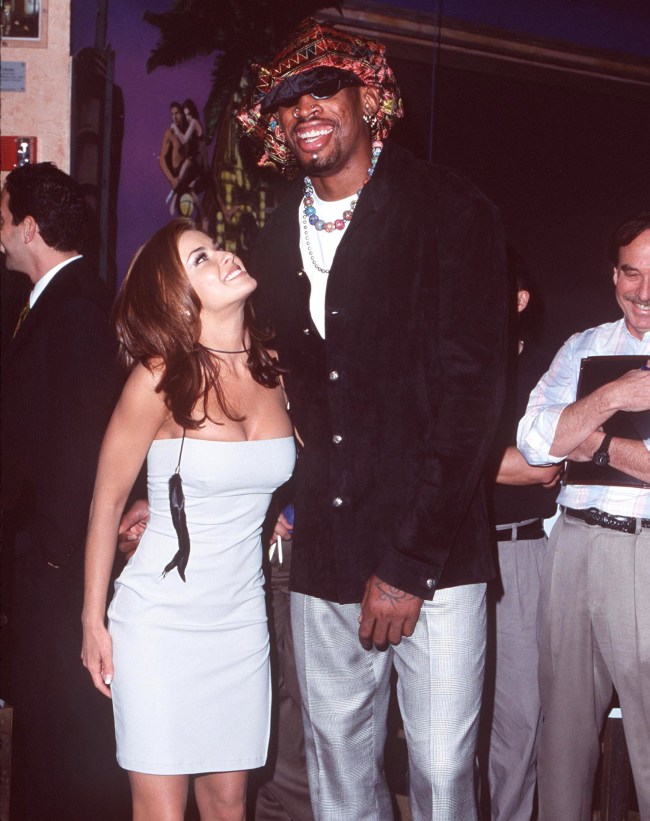 Think your using a lot of hand sanitizer and anti-bacterial wips now? Just imagine if you were a member of the Chicago Bulls in 1997 and you had Dennis Rodman for a teammate.

Not that Rodman isn’t a clean person. I have no idea about that one way or the other. What I mean is that during the Bulls’ run at a sixth NBA championship, he was dating Carmen Electra and according to her, she and The Worm did all sorts of wild, kinky stuff when they were alone in the Chicago Bulls practice facility.

In a new interview with the Los Angeles Times, Electra shared more wild stories about her time dating Rodman during the 1997-98 NBA season that culminated with the two of them getting married in Las Vegas (and getting it annulled nine days later).

Related: Carmen Electra Tells Story Of How She Hid From Michael Jordan When He Stormed Into Dennis Rodman’s Vegas Hotel Room

“One day when the Bulls had an off day from practicing, Dennis said he had a surprise for me,” Electra recalled. “He blindfolds me and we get on his motorcycle. When he finally takes my blindfold off, we’re standing at the Bulls practice facility, center court. It was crazy, like two kids in a candy store. We were eating Popsicles from the fridge and pretty much having sex all over the damn place — in the physical therapy room, in the weight room. Obviously on the court.”

The younglings when they googled “Carmen Electra.”

“To be honest, I don’t think he’s ever worked out so hard in his life,” Electra semi-joked.

Carmen Electra: "It was definitely an occupational hazard being Dennis' girlfriend."

“He was the bad boy of basketball,” she added. “He dated Madonna. The next thing I know, he’s inviting me to get on a flight to Chicago and see him play. Seeing the Bulls play was amazing. Michael and Scottie Pippen. That first night in Chicago, Dennis told me, ‘You’re not leaving.’ After that, it was quick. We fell for each other pretty fast.”

Electra also says Dennis tried to get her a seat on the team plane, but that idea got shot down.

“I was in my 20s. I was down for drinking and going to the clubs,” said Electra. “I ended up becoming one of the boys. He wanted me to go to all the games and everywhere with him.”