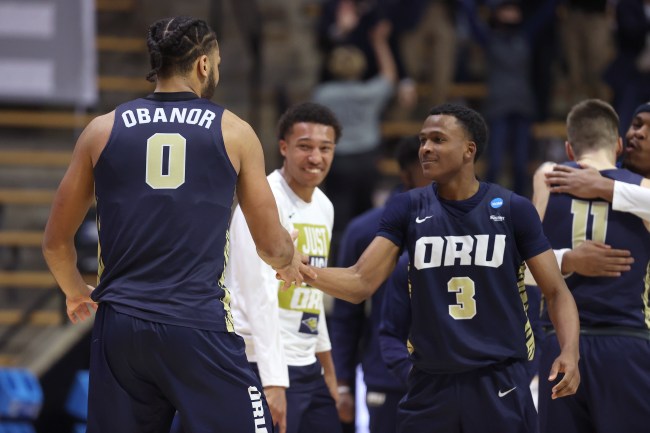 As Oral Roberts has become the darling of the NCAA tournament, many of us have wondered what, exactly, an Oral Roberts is. It sounds like either an extremely old toothpaste manufacturer OR the nickname for some man-child known for his foreplay prowess. As in, “There goes Oral Roberts, doing his jaw exercises again.”

Turns out, it’s neither. Oral Roberts is (obviously) a college in Tulsa, Oklahoma. It was founded by Oral Roberts, the pioneer of televangelism, and it sports a student conduct handbook that will make you thank the Lord above that you went to a different college.

Certain behaviors are expressly prohibited in Scripture and therefore should be avoided by members of the University community. They include theft, lying, dishonesty, gossip, slander, backbiting, profanity, vulgarity (including crude language), sexual promiscuity (including adultery, any homosexual behavior, premarital sex), drunkenness, immodesty of dress and occult practices… Students who disobey these University rules are subject to automatic suspension.

Nothing would make me happier than to put the cancel mob onto the scent of Oral Roberts. Maybe they protect themselves by wording it as “should be avoided by members of the University community.” But prohibiting homosexual behavior on a college campus in 2021 feels like a BIG, BIG problem. If we’re canceling Dr. Seuss, we should probably be protesting at Oral Roberts. Just my opinion though. I won’t pretend to understand the cancel culture order of operations.

No skateboards shall be used or balls thrown in the areas of the residence halls… Scooters, roller skates and roller blades are not permitted anywhere on University property. Water balloons and devices to project water balloons are strictly prohibited on campus.

No balls thrown in the areas of the residence halls? No skateboards? That’s not a college; that’s a birdcage. Also, to specify that water balloons are prohibited feels very specific. Something tells me that was a recent addition, meaning there must have been some HORRIFIC water balloon incident recently. Tough way to punch your ticket to hell.

Profanity is strictly prohibited. Its use subjects the student to disciplinary action.

Let’s hope they don’t mic up any members of their prized basketball team. Something tells me those guys aren’t yelling “aw shucks!” in the paint.

The ORU administration recognizes that opinions vary among Christians as to the propriety of social dancing. However, the following official University policy has been established: social dancing is not permitted on campus…

Earth to Oral Roberts: Footloose called and it wants its plot back. Can you imagine going to college and not being allowed to DANCE? And how about the religious disclaimer recognizing that social dancing is a polarizing topic among Christians. Do they think that softens the blow? Hardly. If anything, knowing that there are lots of Christians who don’t have any problem with dancing should make it all the more unpalatable that this prison of ancient, conservative ideals is CHOOSING to prohibit it.

Then there are some very vague guidelines that seem hard to follow:

Students engaging in any behavior that is considered unhealthy or that could potentially harm their person or that of another, are subject to disciplinary action and possible suspension from the University.

Picking a scab is unhealthy behavior. So is playing seven straight hours of Fifa. Going to bed late. Eating ice cream. I mean where is the line here?

This is my favorite:

The University will not officially sponsor activities that may endanger the lives of its students. High-risk activities, such as canoeing, float trips, river rafting, water skiing, rock climbing, cliff diving, hang gliding, bungee jumping, spelunking and mountain climbing/hiking are prohibited.

Canoeing? Hiking?!?!?!? Am I reading that correctly? GOING FOR A HIKE IS PROHIBITED?

I hope the basketball team makes it to the final four, simply so that someone can shine a light on the preposterous restrictions against which this team succeeded. That would make for one helluva 30-for-30: The World’s Most Oppressed Basketball Team.