A Cheese From America Was Named The Best In The World For The First Time Ever And All I Can Say Is USA!!! USA!!! USA!!! 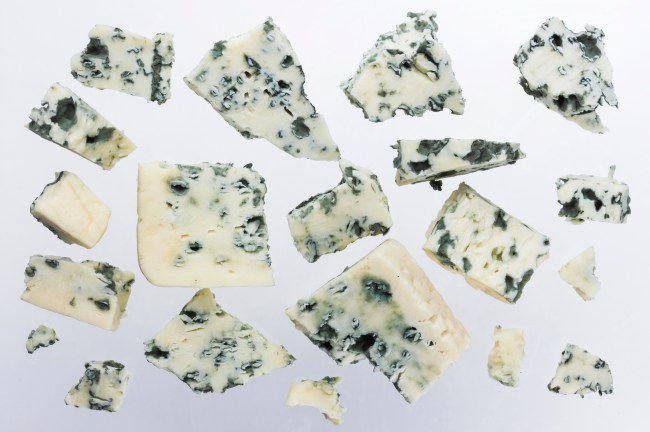 The 32nd annual World Cheese Awards were held in Bergamo, Italy this year. According to Food and Wine, some insiders refer to this as ‘The Oscars of Cheese’ which probably sounds cool if you’re in the cheese industry but to everyone else like myself on the outside it makes me want to bitchslap them across the face with a slice of cheap/processed American cheese for saying something so stupid, but I digress.

This year, there were 3,804 cheeses from across the globe entered into the competition. Each vying for a best in category award as well as the holy grail of being named the single best cheese in the world. This year’s World Cheese Awards broke records for the most cheeses in the competition. 2018 set a record with 3,472 cheeses entered but that was smashed this year with 3,804 vying for the top spot.

Those 3,800 cheeses came from 42 countries spread across 6 continents but ONLY ONE walked away as the best in the world and that cheese was the Rogue River Blue from Rogue Creamery in Central Point, Oregon.

The most exceptional cheeses could be awarded Bronze, Silver, Gold or Super Gold but ONLY ONE could be named best in the world and that was this Rogue River Blue from Oregon. If you are so inclined, you can head on over to Rogue Creamery’s website right now and purchase a 1/4 wheel of this cheese for $75. Here’s the creamery’s description of this cheese, the first American-made cheese to ever be named ‘Best in the World’.

We only make Organic Rogue River Blue in the autumn when or cow’s milk is at its best. After 9 to 11 months in our caves, our team hand-wraps each wheel in organic Syrah grape leaves that have soaked in pear liqueur.
2019 is a particularly fine year for Rogue River Blue. The rinds developed beautifully and the flavor is exceptional, exhibiting the fruit, spice, blackberry, vanilla, hazelnut, chocolate and bacon flavors for which this cheese is known.
On October 18, Rogue River Blue was named World Champion at the World Cheese Awards in Bergamo, Italy, besting 3,800 of the world’s finest cheeses from 42 countries on 6 continents. This is the greatest honor a cheese can receive, and the first time an American-made cheese has been honored with this distinction.
— Shelf life: 180 days
— Suggested Storage: Keep Refrigerated at 38-40 degrees F
— Milk: USDA Certified Organic Pasturized Whole Cow Milk sourced exclusively from the Rogue Creamery — Dairy in Grants Pass, OR
— Ingredients: Organic Cow Milk, Salt, Enzymes, Cheese Cultures and Penicillium Roqueforti
— Rennet: Organic-approved, Vegetarian, GMO-Free MIcrobial Enzyme

LETS CELEBRATE!!! Rogue River Blue was crowned Best Cheese in the World today at the World Cheese Awards!!!! This is the greatest honor a cheese can receive, and the first time an American-made cheese has been selected. We are, simply put, OVER THE MOON! We only make Organic Rogue River Blue in the autumn when our cow’s milk is at its best. After 9 to 11 months aging in our caves, we hand-wrap each wheel in organic Syrah grape leaves that have soaked in pear liqueur. Each September Rogue Creamery releases Rogue River Blue to you — but it won't last long (especially after today's news), so get some now while it lasts! Shop at roguecreamery.com or at your local cheese counter. Not available locally? Ask your cheesemonger to order a wheel!

I’ll eat any cheese that’s put on a plate in front of me. It doesn’t matter how creamy or stiff it is, or if the cheese is so damn stinky that you have to call it stanky with a little extra emphasis on the stank. I love cheese. So I’m stoked to try this out sometime in the near future.

In the end, it came down to the Rogue River Blue and an exquisite Parmigiano Reggiano, according to Food and Wine:

“This year’s top prize was almost too close to call and I would like to congratulate both Rogue Creamery and Nazionale del Parmigiano Reggiano Latteria Sociale Santo Stefano for going the distance and providing us with one of the most dramatic finales in World Cheese history,” John Farrand, managing director of the Guild of Fine Food, which organizes the World Cheese Awards, said in a statement. “Rogue Creamery has been at the forefront of the US artisan cheese revolution for some years, so it seems very fitting for them to be the first American winners of our World Champion Cheese trophy.” (via)

Happy Fall Equinox 🍂🌙🌥🍁 …aka Rogue River Blue Day. Join us as we cheers to the finest things in life: our great planet, the great people we share it with, and this great cheese!!! Today we're celebrating the beginning of a very magical time of year. Cooler temperatures and wet weather has brought renewed growth to our pastures, and as a result our cow's milk is at its very best. So every year on the fall equinox we begin creating our very best cheese: Rogue River Blue. It'll be 9 to 11 months before the cheese we make today is ready to taste – so we celebrate with a wedge of the brand-new 2019 Rogue River Blue, made around this time last year and just released for sale this month.

There was a time, not too long ago, when America was known worldwide for our delicious but shitty Kraft singles. Processed cheese that was easy to pack into frozen and pre-packaged meals but were almost unrecognizable in comparison to proper European cheeses.

Those days are gone. We’re now #1. They can suck our Star Spangled Ding Dongs as we rave this gorgeous Blue Cheese in their faces for the next 12 months.

For a complete list of this year’s winners, you can click here for a PDF of the results. You can also visit the World Cheese Awards website to find all of these cheeses near you.