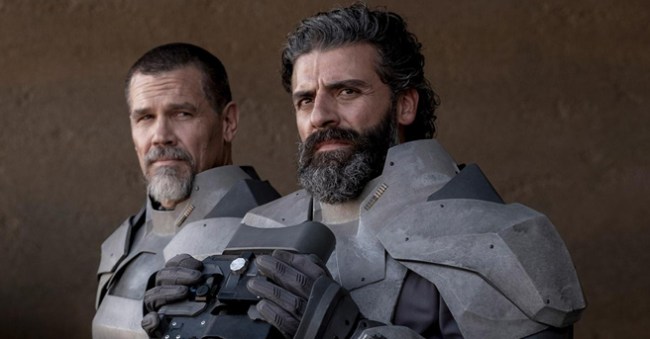 Are you excited about Dune? I sure am, despite the fact that I’ve never read a single page of the seminal 1960s novel nor watched a minute of the David Lynch 1984 film.

Nevertheless, I love a good sprawling sci-fi, and with Denis Villeneuve being one of the world’s greatest living directors, Dune has all of the pieces to be the sort of epic film event that it deserves to be.

Of that stacked cast, I’m perhaps most excited to see Oscar Isaac and Josh Brolin, as these two dudes have someone found a way to exist in a middle-ground between legitimately dramatic actors and massive blockbuster stars (Brolin starred as Thanos while Isaac, of course, starred in the latest Star Wars trilogy).

my new religion is Oscar Isaac’s beard in Dune pic.twitter.com/HhbAWsxmBE

Despite the fact that the pair have spent the better part of the last year filming a likely grueling and intense sci-fi epic, the two have obviously developed a solid friendship, as Isaac made a legitimately laugh-out-loud comment about the size of Brolin’s preposterous dome piece during a recent press event.

Speaking to Stephen Colbert, who was hosting the event, Isaac quipped that nothing he saw on the set of Star Wars compared to the sheer scale of Brolin’s head.

“Well, I’ll just say that, you know, no set piece, no X-wing, no Millennium Falcon could compare to the sheer scale of Josh Brolin’s head,” Isaac said. “It was massive, both literally and figuratively. And it really made me feel like I was on an alien planet.”

Ya just gotta love that — even when you’re an internationally famous A-list actor — more times than not, guys are just bein’ dudes, bustin’ each other balls.

At this time, Dune — which already has a sequel in the works — is scheduled to hit theaters in the United States on December 18.