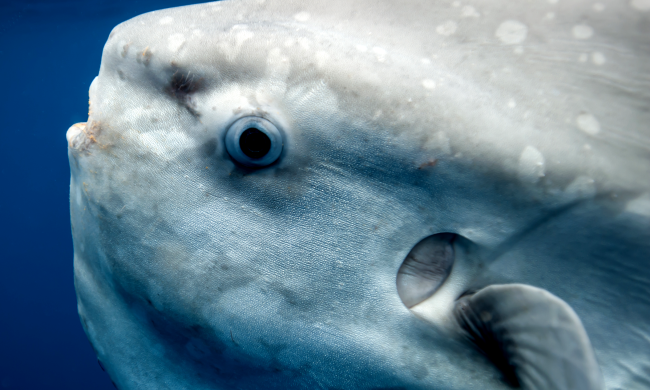 Two paddleboarders had an experience they will never forget when they recently had an encounter with a giant and “bizarre looking” ocean sunfish off the coast of California.

“We were just paddling and all of a sudden we were like ‘Oh my god.’ That thing was massive,” said German, founder of the ocean conservation nonprofit Project O. “Most of my encounters are with dolphins and whales, but you never know what you’re going to see.”

German estimated that based on his paddleboard being 14 feet in length that the massive ocean sunfish was probably around 9 feet long.

Once home, he found a Guinness World Record set in 1996 when a fisherman caught an 8-foot-11 mola mola that weighed 5,070 pounds off the coast of Japan. While that record was for the heaviest fish, which would be tough to compare with the sunfish the pair encountered off Laguna Beach, German said he thinks their’s could be longer in length and is hoping to consult with marine scientists to see if it could be measured based on the size of the board.

Julianne Steers, a marine biologist and founding board member of the Beach Ecology Coalition, said about the discovery, “The only true way to know is if it was out and weighed and officially measured. But it does look much larger than what we typically see out here.”

She also added, accurately, “It’s such an oddball kind of assembly of parts.”

German said on Facebook that it was the largest sunfish he had ever seen.

“The first time I saw one, I didn’t know what it was. I thought it was a mutilated shark,” he said. “They are so bizarre looking. They just lay there.”

Related: This Facebook Rant About The Sun Fish (Mola Mola) Has Me Crying With Laughter

“I just know it was really big,” he told the media. “It was a unique and very cool thing to experience, and another example of why we need to protect the ocean and the amazing life that calls it home.”

Check out some video of German’s encounter with the giant fish below. (He was much calmer about it than the Boston guy who went viral back in 2015.)