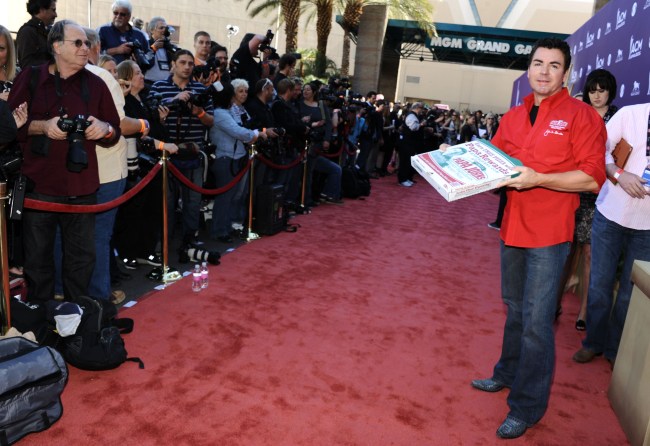 The dude has had a tough go at it in recent times—he nearly drowned in his own sweat during an interview several months back in which he admitted to the obvious cry for help of eating 40 pizzas a month. His wife, who in 2013 he called “the finest human being I’ve ever met,” filed for divorce a few weeks before Christmas. And, worst of all, his jean selection is alarming.

With that said, Papa John moves the needle. Plain and simple. Credit to papa. And his boot-cuts.

Mr. Schattner is going viral yet again by way of his TikTok account. The disgraced pizza empire founder let us inside the doors of his $11 million Kentucky mansion he calls “The Papa Castle,” and it took us a grand total of 0 seconds to find something bizarre. Yes, you guessed it:

A 25-FOOT STATUE OF TWO EAGLES BONING THAT ALSO DOUBLES AS A CLOCK.

Why a clock as well?

“Eagles go up several thousand feet and mate all the way down,” Papa explains. “Right before they hit, they separate so they don’t get hurt or killed. Perfect timing.”

Papa John is giving a tour of his gigantic gaudy mansion on TikTok pic.twitter.com/dfqSmLdUBt

The Athletic’s Pablo Maurer revealed the lengths Papa went through to make Eagles Boning the centerpiece of his mansion.

Friend of mine has been in this house and told me that the sculpture in the foyer was “eagles fucking.” I didn’t believe him. He said Papa John told him they had to cut the roof off of the house to drop it in. Now I see it’s true. Grab the pitchforks, capitalism is dead.

Papa John wanting to be cool so bad that he bought a giant statue of eagles fucking in the sky that somehow makes him look even more uncool is my favorite. https://t.co/dXPX4RmtLF

If Papa isn’t cool, then explain his recent TikTok walking in slow motion to his personal helicopter with his 2001 American Eagles jeans while B.I.G.’s Big Poppa plays in the background?

Papa John wilin since he lost his job pic.twitter.com/268jlMKI4W

You win this round, Papa.