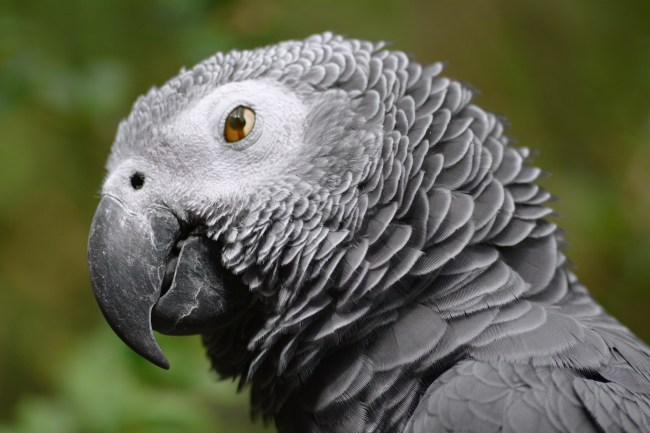 Parrots are awesome. Probably the weirdest thing to happen to me in 2020 during this disruption in daily life is how I’ve become borderline obsessed with this flock of wild parrots in my neighborhood. I can hear them coming from a mile away. They’re Nanday Parakeets which aren’t native to Florida but they’re found all over in the wild. I’ll find 40 of them sitting on the telephone lines or in a palm tree with their green and blue feathers looking all majestic.

Unfortunately for me, these parrots in my neighborhood don’t speak in complete sentences like the African Grey Parrot (aka Congo Grey Parrot) which are a popular pet and can mimic all sorts of sounds. One specimen was observed ‘with a repertoire’ of over 200 different sounds from words to mimicking 9 other wild bird songs and even a bat sound. People often teach them to repeat swear words which always comes back to haunt the pet owner because the birds then swear on repeat until the end of time.

These are considered to be highly intelligent birds and that was on display when five African Grey Parrots named Billy, Elsie, Tyson, Jade, and Eric at a wildlife park in England taught each other profanity which the birds then used to hurl insults at visitors. This resulted in the birds having to be removed because the zookeepers were legitimately concerned by the insults.

The African grey parrots — named Eric, Jade, Elsie, Tyson and Billy — were given to the park from five different owners within the same week, and shared a quarantining facility together before being placed on display. But staff immediately noticed that the birds shared a propensity to fly off the handle.

“They literally, within a very short period of time, starting swearing at each other,” Nichols said. “‘F**k off’ is the most common one,” he explained — “it’s a very easy one for them to learn” — but the birds would utter “anything you can think of.” Most customers enjoyed the talent once the parrots were displayed. “The visitors were giving them as much back as what they were giving to them,” Nichols said.

“It just went ballistic, they were all swearing,” the venue’s chief executive Steve Nichols told CNN Tuesday. “We were a little concerned about the children.” “I get called a fat t**t every time I walk past,” Nichols complained. (via AZFamily)

That sounds like a perfect day at the zoo to me but I can understand why certain people wouldn’t want young children learning vulgar insults from some parrots. Personally, I’d love it if my son was taught to swear by parrots because it would make for an excellent story later in life. In fact, that would actually make a perfect college entrance essay topic (IMHO).

If you’re wondering what this looks like in action, here’s an older clip of some parrots swearing including African Greys. If you’re bothered by profanity, and I cannot for the life of me imagine why you would be or how you’d ever justify that to yourself, then this video isn’t for you:

I should really get a parrot. Aside from the fact that it would likely out live me, they seem awesome.