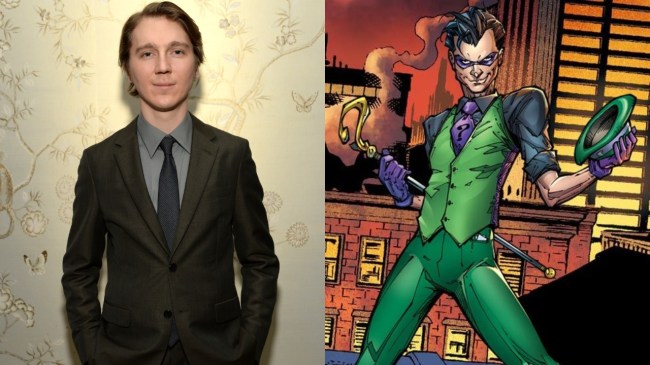 The rebooted Batman cinematic universe has added another talented name to its growing cast list as Paul Dano (There Will Be Blood, Prisoners) is reportedly in talks to star as iconic Batman villain Edward Nygma/The Riddler in the project.

The news of Dano’s casting comes just days after it was announced that Zoe Kravitz (Big Little Lies) had signed on to play Selina Kyle/Catwoman and that Jonah Hill had dropped out of discussions to star in the film as either Riddler or Penguin.

According to Variety, sources have told them that Dano is currently in talks to star alongside Robert Pattinson in The Batman, which is being directed by Matt Reeves (War for the Planet of the Apes).

The report indicates that while Warner Bros. would not confirm the casting, “insiders believe the part Dano would be playing if the deal closes is the classic comic villain The Riddler.”

Dano has a history of playing seedy, disturbed characters, so when considering his physical resemblance to Edward Nygma, casting him as The Riddler is a deft move by Warner Bros.

Given that it’s long been rumored that The Batman will feature multiple iconic characters from the Dark Knight’s vast rogues’ gallery, expect the announcement of Dano’s and Kravtiz’s casting to be the first of many in the next couple of weeks.

Rumors surrounding the film have previously suggested that Riddler, Catwoman, Penguin, and Firefly would feature as the film’s main antagonists, so with two of those characters now confirmed to appear, it’s looking more and more likely that Penguin and Firefly will be the next two roles to be cast.

In addition to Dano, Pattinson, and Kravitz, The Batman — which is set to hit theaters in the United States on Friday, June 25, 2021 — also stars Jeffrey Wright as Gotham City Police Commissioner Jim Gordon.