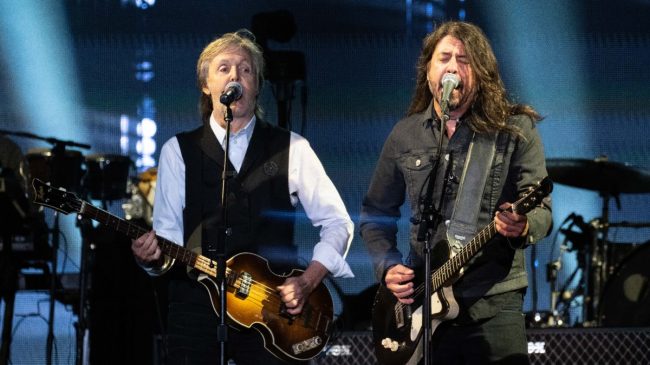 Dave Grohl made his first live appearance since the passing of Foo Fighters bandmate Taylor Hawkins. The legendary drummer was found dead while the group was on tour, hours before a show in Bogota, Colombia.

The Foo Fighters posted a message following Hawkins’s passing, but they’ve remained out of the spotlight since the tragic event.

Over the weekend, though, lead singer and guitarist Dave Grohl got back on stage for the first time.

And he joined one of music’s greatest icons in the process.

Grohl was brought on stage by Beatles front man Paul McCartney. The two performed at the Glastonbury Festival in England, where McCartney was a headlining act on Saturday evening.

The two rock stars sang McCartney’s Band on the Run, which he made famous with his second band, Wings. It’s a song that Grohl is very familiar with having performed it at the White House in 2010.

.@PaulMcCartney and Dave Grohl performing “Band On The Run” together on the pyramid stage at @glastonbury festival, 25.06.2022 ✨
🎥: from @bbcglasto pic.twitter.com/bR3kANDfAj

The duo performed Band on the Run and the crowd was absolutely loving it. Prior to this hit, they sang a classic Beatles song I Saw Her Standing There.

Grohl wasn’t the only superstar to make an appearance. McCartney also sang a few classics with Bruce Springsteen before the trio teamed up to perform The End, one of the final songs on the Abbey Road album.

An awesome moment for those in attendance, and it’s certainly great to see Grohl back on stage.