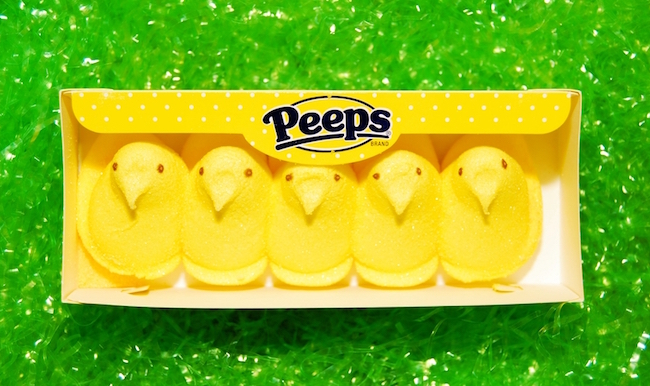 If you celebrate Easter, then you’re undoubtedly familiar with Peeps, which are animal-shaped marshmallows covered in sugar that may singlehandedly give you diabetes if you exceed the suggested serving size. Even if you’re not a fan of the treat itself (if not, you’d probably be horrified of this video of a man who ate 255 of them in five minutes), it’d be hard to track down someone who doesn’t enjoy watching them explode in the microwave.

Peeps have inspired things including a candy corn variation and their own line of Oreos and were at the center of some good ol’ classic hyperbolic internet outrage last year when someone threw them onto a pizza (they still somehow manage to rank above pineapples on the list of best toppings). Now, the seasonal snack has inspired a new item that proves mankind has gone too far for its own good: glitter beer made with Peeps.

The concept of glitter beer is a fairly new one that’s being tested out by at a number of places, but Texas breweries Collective Brewing Project and Taps and Caps decided to take things to the next level by throwing in the candy corn of Easter. According to The Dallas Observer, the beer— which has been dubbed “Peep This Collab”— is unlike other novelty adjunct brews as its base is a sour as opposed to a stout.

If you’re in the Fort Worth area on Friday, you’ll have a chance to try the beer at either brewery’s tap room. You should also be able to pick it up to go in order to make Easter dinner slightly more bearable.