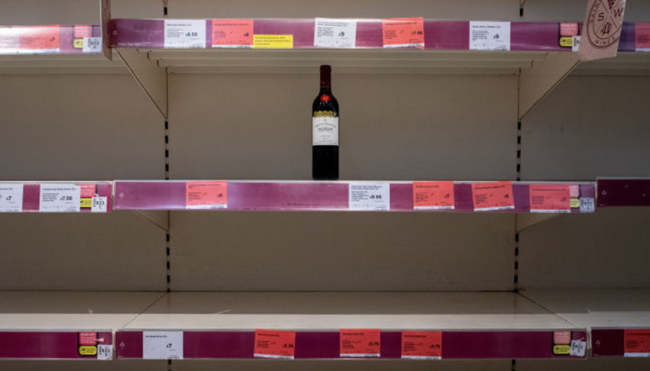 In the spring of 2020, most people found themselves grappling with the various shortages that resulted when consumers scrambled to stockpile toilet paper, canned goods, and the assortment of other items the general public thought they’d need an ample supply of in order to weather a pandemic.

Thankfully, alcohol was largely (and mercifully) immune from that pillaging of shelves across America. However, plenty of companies have found themselves confronted with the fallout of the ongoing health crisis in the wake of that initial rush, and based on what’s currently unfolding in a couple of states, it looks like the piper has finally arrived to demand payment from the booze industry.

A few months after COVID-19 arrived in full force, craft beer drinkers were told to brace themselves for a potential dearth of aluminum cans,  a warning that thankfully turned out to be largely overhyped. However, some fans of harder libations weren’t as lucky this summer when Jack Daniel’s, Tito’s, and a number of other brands had trouble keeping bottles in stock due to the glass shortage that made their wares particularly difficult to track down in certain states.

Now, drinkers in the Mid-Atlantic are weathering a perfect storm of unfortunate factors that’s currently raging in New Jersey and Pennsylvania, as purveyors of booze in both states say they’re grappling with a number of issues that have resulted in plenty of bare shelves at liquor stores and disappointed customers at bars and restaurants.

One outlet in New Jersey spoke to a number of proprietors who said a combination of supply-chain issues, labor shortages, and crop damage has made it increasingly difficult to keep a variety of different types of alcohol in stock, ranging from bars that are having trouble tracking down rosé to liquor stores that are struggling to source scotch, cognac, and tequila.

The situation is even direr in New Jersey’s neighbor to the west. People in Pennsylvania already had enough of a headache to deal with thanks to the state’s infamously perplexing liquor laws, but they’re now being subjected to the rations that have been instituted by its Liquor Control Board. According to The Philadelphia Inquirer, the PLCB has placed a two-bottle limit on dozens of different products sold at state-controlled stores, which has impacted popular brands including Hennessy, Moët & Chandon, Don Julio, and Buffalo Trace.

My heart goes out to everyone affected by the latest dilemma on a platter that’s been overflowing with them for over a year.