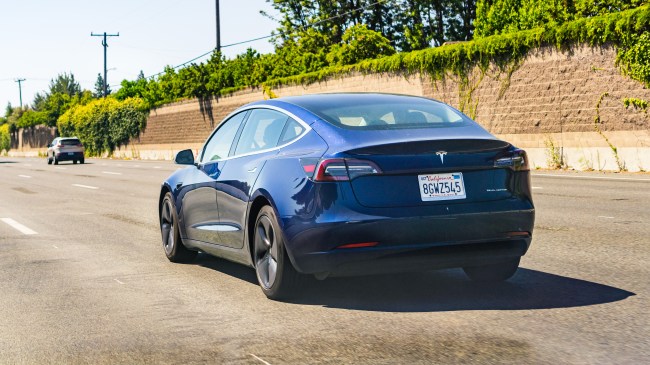 This one is for all the haters out there. For the people people who see a brand new Tesla and think to themselves ‘f*ck that person and their car’ for whatever reason. Maybe it’s jealousy that they can’t afford one or maybe it’s some pathetic disgust of green technology.

I don’t know what has driven these people to be assholes but I do know that they’ve all paid for their incompetence. One thing that anyone who doesn’t have a Tesla should understand is these are amongst the most technologically advanced cars ever built and that means the cameras are always rolling.

If you approach the car, there’s a camera rolling. If you vandalize the car, you were caught on camera. Trying to break into a Tesla? Yup, you were recorded. Decided to fuck around in traffic and sideswipe a Tesla for no reason? You better believe there’s high-resolution footage of that incident.

A YouTuber put together this quick compilation of people vandalizing, breaking into, and crashing into Tesla cars and then trying to get away with it. They all got caught.

I think the primary lesson to be learned here is don’t be an asshole. You can extrapolate that out to ‘don’t be a criminal’ and/or ‘live and let live’, you can take that however you want.

If you just stick to the basic tenet of ‘don’t be an asshole’ then there’s a solid chance that you won’t ever find yourself on the business end of a social media mob who has tracked you down for vandalizing or breaking into a Tesla after you were caught on the car’s HD cameras being an asshole.

As someone pointed out on Reddit where this video was shared, it would be amazing if part of these criminal’s punishments was they had to go back and watch the videos of them being complete dumbasses on repeat for hours. Similar to when Wednesday Addams was sent to that hut in Addams Family Values and had to watch some Disney movies on repeat as part of her rehab/punishment.

If these people could just see how fucking stupid they look on camera then maybe they’d think twice about breaking the law in the future.