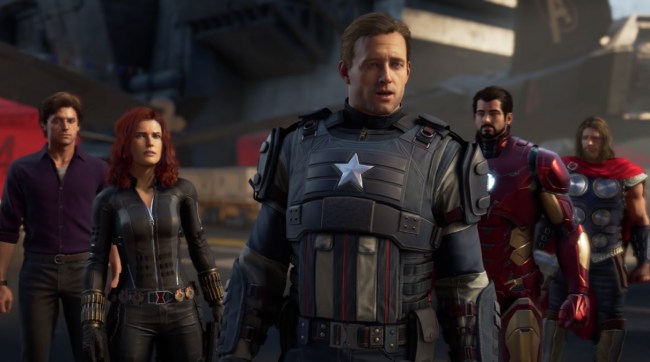 After making fans wait, and wait, and wait some more, Marvel and Square Enix finally announced an open-world Avengers video game at this year’s E3.

Thew news of the impending arrival of Marvel’s Avengers on PlayStation 4, Xbox One, PC and Google Stadia was met with much joy.

Then everyone watched the trailer.

And… ummm… who are these people and why do they sound so odd?

Granted, no one expected a Avengers video game to have the characters look and sound exactly like they have for the past 10-plus years (okay, EVERYONE expected that), but still, why do they all look and sound so… generic?

live look at me watching Square Enix's AVENGERS game trailer at the precise moment where I realized they didn't get likeness rights for any of the actors pic.twitter.com/FMAGpV7c9p

I could get over them not looking like the actors if they didn't look so damn weird.

They got Cap looking like an over the hill trainer at Planet Fitness.

Why do they all look like they just got off a hard shift at the local factory? They don’t even look that great in their costumes, the color is so muted. These are Earth’s Mightiest Heroes and they look like bootleg knockoffs.

I didn't think seeing the avengers not looking like the MCU versions was going to be so weird for me. But it is.

They look like a strange bootleg Avengers in my brain.
Major U.S.A
Steel Guy
Dark Spider
The Bulk
NotThor pic.twitter.com/O4YmteY4vk

Well, they finally announced the avengers games, oh boy, that announcement was something else, haha#SquareEnixE3 #Avengers pic.twitter.com/JdCw44Bidw

excited to share this concept art for the new avengers game pic.twitter.com/RLcujTd2xa

This is literally an undyed Fieri pic.twitter.com/jMzBY4N0pb

She definitely called the cops the first time she saw Black Panther and Falcon outside the headquarters pic.twitter.com/OMznRwHZD8

He wears a mask the whole time but Thor does not. And black widow looks like my bank teller https://t.co/uTUZ4Ema6N

This must be a PlayStation 2 exclusive

Also… where is Hawkeye? 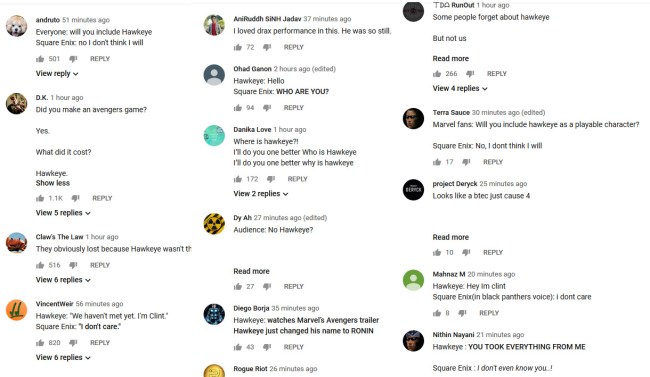 I see why Hawkeye didn't show up. pic.twitter.com/8mSOD57RYK

hawkeye appears in the avengers game at the pause menu, fucking off and doing something completely unrelated

Oh, well, at least Keanu Reeves looks like a total badass in the upcoming Cyberpunk 2077.