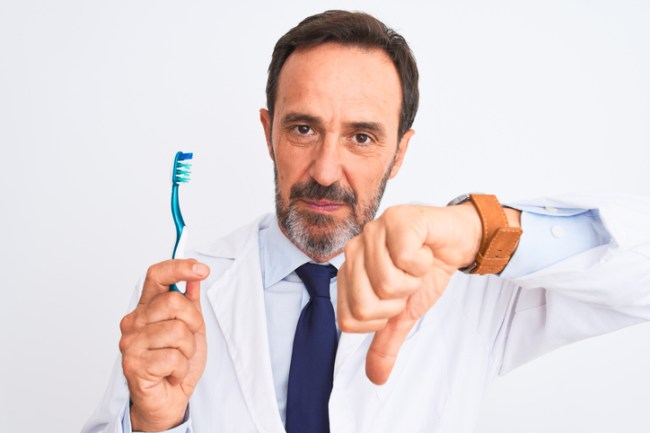 This is not the actual dentist.

On Tuesday, I wrote a blog about six tourists who are facing charges of pooping all over Machu Pichu’s sacred Sun Temple. It’s not exactly work for the portfolio, but if a story includes “Machu Pichu” and “poop,” I’m going to write about it 100% of the time. I don’t have a choice, really; that’s how I was raised. The sounds of those words send happiness shivers down my spine. Machu Pichu + poop = funny. I remember watching Kramer as AG Pennypacker eating the Putamayo chips and saying, “mmm, Machu Pichu.” It may have been my biggest laugh at any Seinfeld moment throughout the show.

But I’ve been in the blogging game long enough to know that one must never underestimate the sensitivity of one’s readers. Let me clarify that—you can never predict what topics or takes will upset the heartstrings of your readers. It’s a lesson I learned early. Years back, I wrote a simple blog condemning an emotional-support pitbull that had mauled a young girl’s face at an airport. Surely, nobody would ever take the opposite side of that, right? The girl was seven or something.

Wrong. Card-carrying leash holders from the pitbull lobby descended upon my DM inbox like locusts, shaking their pitchforks and calling for my head. “You don’t understand pitbulls!” they ranted. “You’re contributing to the misperception of these harmless, loyal dogs!” Uhm, exsqueeze me? I covered a story about a pitbull treating a young girl’s face as a chew toy. What a strange place to make your stand. Try this: I love baby spinach, but if a story broke about an E. coli outbreak stemming from contaminated bags of baby spinach, I wouldn’t tell the spinach eaters that they “misunderstand the spinach.” I’d sit quietly until the storm subsides, then try to rebuild the good name of baby spinach by pointing out its nutritional benefits and painting that one, measly, isolated E. coli outbreak as an exaggerated conspiracy by the kale farmers to dethrone a competitor. But I guess that’s what separates me from the pitbull lobby: they are reactive (surprise surprise) while I am contemplative and cunning. Envision the long game, kids.

Back to the Pichu. Out of nowhere, I received the following email: 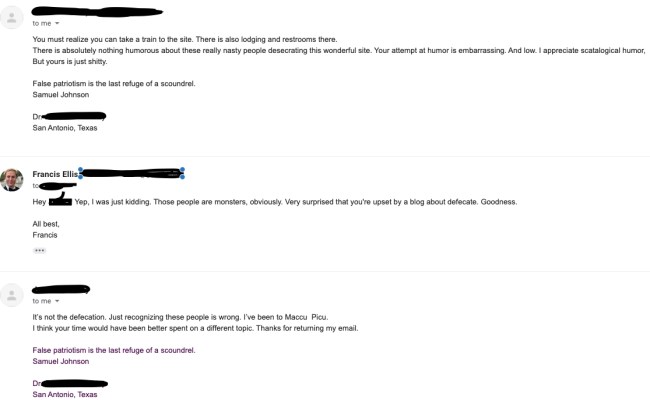 Of course I did a little research and found the guy. He’s a dentist in San Antonio, which is all I’ll say to keep my nose out of a defamation suit. Normally I don’t like to spotlight the fanciful protests of faceless nincompoops. Lions and sheep and all that. But heavens to betsy, we have a lot to unpack here. Come on in, the water’s warm!

The good doctor starts by schooling me on a few factual inaccuracies from my blog. As an exercise, I wrote in defense of the poopers, suggesting that their four-day hike into Machu Pichu jostled their digestive systems to such a degree as to render them incapable of not pooping everywhere. At this, the good doctor bristled: “You must realize you can take a train to the site. There is also lodging and restrooms there.” Ah, good doctor, this is news to me! Indeed, I was unaware of the transportation available to Machu Pichu seekers. I once was blind but now I see.

But to his second point, I must disagree. “There is absolutely nothing humorous about these [people who pooped all over a Machu Pichu] desecrating this wonderful site… I appreciate scatalogical humor, but yours is just shitty.”

The mind reels. Is he toying with me? Is that last line a pun? I want to say that his email proves that he absolutely does NOT appreciate scatalogical (poop) humor. But to use the word “shitty” to describe my attempt at humor is… is… brilliant? Christ, I don’t even know what to think anymore. I’m almost certain that he’s serious in all of this, but that line threw me for a loop.

I responded with a white flag of truce, barbed with a tiny tinge of passive-aggressive language. Couldn’t help myself, sorry. But let me tell you this: I researched the man. He’s a prominent and respected dentist in San Antonio. Articles have been written about him. He loves to travel, all over the world. Which brings us to the big question:

Why, in God’s name, is he reading a poop blog on BroBible? And more stupefyingly, why is it affecting him so much as to find my email and voice his anger to me?

He justifies it by saying that “I think your time would have been better spent on a different topic.” Buddy, you seriously overestimate the value of my time. Not all of us are dentists man. Look at you, in your fluoride tower, advising us peasants on how to spend our time. Do you think I carved out time for that blog in between reading to blind kids and feeding my grandfather soup? Do you think that story was my first choice? I spent three hours that morning scouring the internet for something that caught my eye, trying to decongest the standstill traffic in my brain. I saw the poop story and thought, eh, ok. It wasn’t a jump-for-joy discovery. I’m eating cereal out of a mug right now. I’ve got time.

Furthermore, we all know you’ve been to Machu Pichu. I gather that because of your visceral defensiveness about the place, but also because you spell it “Maccu Pichu.” At first, I figured this was some local, insider’s spelling. Like when people pronounce Ibiza “Ibitha” or say “Melbuhn” instead of “Mel-born.” Turns out, he’s just bad at spelling. For someone who cares so much about the place, you’d think he’d get the damn name right. I award you no points, doc.

Last thing: from the first email, I thought that Samuel Johnson quote was some aggressive, convoluted lesson for me to ponder. Nope! It’s just his goddamn email signature. He has that in EVERY SINGLE EMAIL! WHO the FUCK is this guy?!!!!!!!!! Imagine emailing him a dinner invitation and receiving “Would love to come! I’ll bring pasta salad. False patriotism is the last refuge of a scoundrel. See you tomorrow!” Nobody wants that guy at dinner. Fuck your pasta salad.

I did some research on the quote, obviously. Samuel Johnson was an 18th century English writer who made monumental contributions to the language. He published The Dictionary of the English Language in 1755 that stood as the standard for English for 150 years, until the Oxford dictionary came out. Johnson’s contributions seem endless, but let’s focus on that quote. Just like his spelling of Machu Pichu, the dentist fucked it up. It’s actually just “Patriotism is the last refuge of a scoundrel.” Without the false. This is important because the meaning of the quote is commonly misinterpreted. Many people think that Johnson is decrying patriotism in general, but he actually believes in “true patriotism.” Ironically, Johnson’s issue is with false, or misguided, patriotism. But he doesn’t say that. As such, our dentist is taking liberties with the famous quote, adding a key word to fulfill its original meaning. Or MAYBE (definitely) he learned it wrong, thought it sounded smart, and threw it in all his emails. Based on his spelling errors and the preposterous battles he chooses to wage over poop blogs, I have to believe he’s simply a dumb guy.

This leads me, finally, to the point of this entirely unnecessary, 1300-word clapback blog: I hate people who use big words and quotes to portray themselves as being smarter than they actually are. I hate them with a passion. You see them all over instagram, delivering political and social sermons full of weirdly huge words sourced from Thesaurus.com that don’t quite fit. It’s pathetic, and most people won’t see through it. Truly intelligent people do not posture with big words and 18th-century misquotes to confuse simpler minds for the sake of seeming smarter. They are secure in their intellect.

In closing, dear San Antonio dentist, you’re not as smart as you think you are. And don’t ever tell me not to joke about Machu Pichu poopers again.