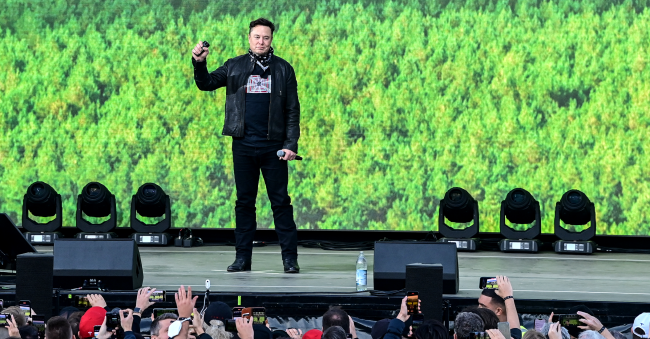 On Monday, Time magazine named Space X and Tesla honcho Elon Musk their 2021 Person of the Year. Interesting choice to be sure.

First of all though, can we all agree that it really doesn’t matter who is named Time’s annual Person of the Year? No? We can’t? Hmmm… okay.

As Time’s Person of the Year, Elon Musk now gets to… ummm… wait… one sec.. okay, here we go… according to Time…

The title goes to “the person or persons who most affected the news and our lives, for good or ill, and embodied what was important about the year, for better or for worse,” as former Managing Editor Walter Isaacson wrote in the 1998 issue. That means the person is not necessarily a hero—Adolf Hitler, for example, was Person of the Year in 1938, with a cover showing him playing a ghastly organ and a cover line touting, “From the unholy organist, a hymn of hate.” Stalin got the nod twice, while the selection of Iran’s Ayatullah Khomeini in 1979, when the magazine called him “the mystic who lit the fires of hatred.” And some choices have been ambiguous; take Newt Gingrich, who was a hero to some and a menace to others.

Apparently, Elon Musk falls into basically all of those categories. At least based on the reaction of the announcement by many on the internet.

Time says the future overlord of Mars and richest human being on Earth “embodies the zeitgeist of this liminal age” in its saccharin, fawning, absurdly long, 6,947 word profile that begins with a tale of him taking a sh-t.

This is the man who aspires to save our planet and get us a new one to inhabit: clown, genius, edgelord, visionary, industrialist, showman, cad; a madcap hybrid of Thomas Edison, P.T. Barnum, Andrew Carnegie and Watchmen’s Doctor Manhattan, the brooding, blue-skinned man-god who invents electric cars and moves to Mars. His startup rocket company, SpaceX, has leapfrogged Boeing and others to own America’s spacefaring future. His car company, Tesla, controls two-thirds of the multibillion-dollar electric-vehicle market it pioneered and is valued at a cool $1 trillion. That has made Musk, with a net worth of more than $250 billion, the richest private citizen in history, at least on paper. He’s a player in robots and solar, cryptocurrency and climate, brain-computer implants to stave off the menace of artificial intelligence and underground tunnels to move people and freight at super speeds. He dominates Wall Street: “The way finance works now is that things are valuable not based on their cash flows but on their proximity to Elon Musk,” Bloomberg columnist Matt Levine wrote in February, after Musk’s “Gamestonk!!” tweet vaulted the meme-stock craze into the stratosphere.

Pretty good for a guy who as a kid, Time says, was targeted “relentlessly” by “vicious gangs of bullies” that beat him so badly he was once hospitalized (“until he hit a growth spurt in high school and started punching back”).

However, in a twist that everyone, including Time saw coming at least 62 miles away, this “honor” being given to Musk is not sitting well with everyone.

Really? Not healthcare workers for 2 years of service during pandemic? Not teachers for teaching through the 2nd year of a pandemic? Not virologists for vaccines that are saving lives?

Did he offer your staff a free ride to space? I can’t think of any other reason you’d do this.

Not the scientists who developed the Covid vaccine, not those who risked their lives to protect the Capitol on 1/6, not Dolly Parton or others working to provide equity in vaccine access, healthcare, food security...not a million other more deserving folks?

I'm pretty sure a "man of the year" would use his billions to stop poverty, suffering & climate change around the globe. Not take actors into space.

The richest person in the world. Who, rather than using their $270,000,000,000 to solve pressing real-world problems simply…doesn’t. What an outstanding example to us all.

Man, what’s a clown genius edgelord visionary have to do to get a little respect around here?

Glad he finally caught up. I already was the person of the year 15 years ago. pic.twitter.com/nK0BGAquJy

Those were the days…

this is a joke that no one is laughing about!!

nobody is eating this up! we know britney actually deserved this. #livinglegend pic.twitter.com/i2AKGHByhW