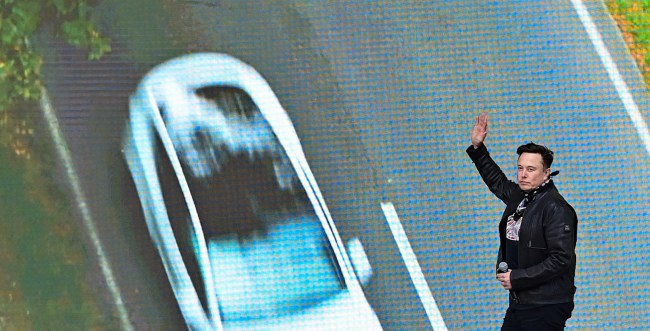 Elon Musk has had himself a year. Not only did his SpaceX company sign a nice deal with NASA (much to the chagrin of Jeff Bezos), Tesla has seen it’s value as a company go through the roof.

Which means, since Musk is the CEO of Tesla, he too has seen his wealth skyrocket to heights never seen before.

As of Wednesday night, Musk, at $292 billion, sits so far ahead of the next person on the Bloomberg Billionaires Index that you could combine Mark Zuckerberg and Bill Gates’ wealth and still not have as much wealth as the SpaceX founder.

In fact, if you combined Jeff Bezos’ wealth (second on the list) with Warren Buffett’s wealth (10th on the list), Musk would still only be $9 billion behind.

Related: Almost 70 Years Ago, A German Scientist Predicted An ‘Elon’ Would Lead Us To Mars

According to Liam Killingstad of Front Office Sports, Musk has so much wealth now, if he wanted to he could buy every single Major League Baseball, National Basketball Association, National Football League and National Hockey League team.

He is now worth more than every MLB, NBA, and NFL team…combined at $241 billion pic.twitter.com/MZXe64M0qk

Crazy, right? Well, let’s see what else Elon Musk could buy with his $292 billion.

He could, if he wanted to, buy around 1.1 million Lamborghini Huracan supercars.

Or, he could just put it all into around 161.5 million ounces of gold.

That, or he could just buy up every single one of the most sought after trading cards in the world. $6.6 million for a Honus Wagner? $5.9 million for a Steph Curry card? $3.1 million for a Tom Brady card? Mere drops in the bucket for the future overlord of Mars.