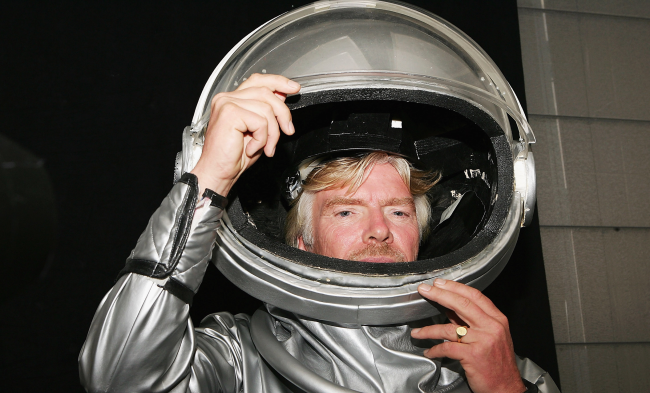 Billionaires Jeff Bezos and Richard Branson are in the middle of having a d-ck measuring contest where the first one to fly to outer space wins and as of this writing Bezos appears to have gained the upper hand. Sir Richard, however, may have other plans.

On Monday, Bezos announce that he will be on board the first human spaceflight for his company’s New Shepard spacecraft “because it’s the thing I’ve wanted to do all my life.”

It took Branson and his Virgin Galactic team just one day to say that they were now planning to beat Bezos to space.

According to a report by Doug Messier of Parabolic Arc, a source who requested anonymity told them, “Virgin Galactic is working on a plan to send Branson on a suborbital flight aboard the VSS Unity SpaceShipTwo rocket plane over the July 4 holiday weekend.”

That would put their space flight two weeks before the Amazon founder’s trip on July 20.

Related: Jeff Bezos Announces He Is Going To Space Next Month On One Of His Rockets

“We are in the process of analyzing the data from our successful May 22nd flight. As previously announced, we expect to complete the final test flights this summer through to early fall. At this time, we have not determined the date of our next flight. An objective from the last flight was to collect data to be used for the final two verification reports that are required as part of the current FAA commercial reusable spacecraft operator’s license,” a Virgin Galactic spokesman said in a statement released on Tuesday.

This new plan is in direct response to Bezos’ announcement, said the source.

One of the main things holding Branson and Virgin Galactic back is obtaining a commercial reusable spacecraft operator’s license from the Federal Aviation Administration (FAA). That and making the VSS Unity and its VMS Eve WhiteKnightTwo mother ship ready to fly to space by July 4.

But hey, when you’re shooting yourself into space on a rocket, why not rush things just so you can say you were first?

If Branson succeeds in hitting his new timeline, Parabolic Arc says there will likely be a debate over whether he actually reached space – which he will surely claim he did.

That’s because Richard Branson’s VSS Unity has only made suborbital flights above 50 miles – what the FAA recognizes as the boundary of space – while Bezos and his New Shepard can go above the Kármán Line, 62 miles (100 km) above the Earth’s surface – what Fédération Aéronautique Internationale considers to be the dividing line.