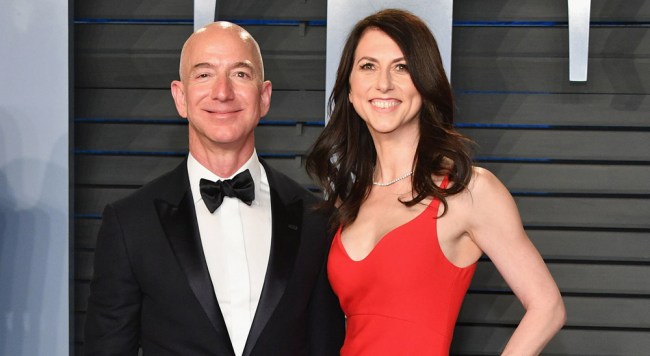 It was revealed this week that Amazon CEO Jeff Bezos’ renovation plans for his Kalorama mansion in Washington D.C. include 25 bathrooms and folks on Twitter have questions. Many, many questions.

They’re not alone in their wonderment either. Look, I know Bezos is the richest man in the world (depending on the day), but 25 friggin’ bathrooms? What makes it even more odd is that the floor plans, published by Washingtonian “only” asks for 11 bedrooms. So Bezos and fam need more than two bathrooms for every bedroom? What is going on here?

Forget the fact that at 27,000 square feet it is the biggest home in Washington D.C.. Forget that the renovation and expansion will cost around $12 million. Forget that the house has an astounding 191 doors, five living rooms/lounges, five staircases, three kitchens, two libraries/studies, two workout rooms, two elevators, and a gigantic ballroom. WHY SO MANY BATHROOMS, JEFF?

How do you use 25 bathrooms in a single-family home?

How much does this dude need to shit!?

How the shit do you have more than a 2:1 bathroom/bedroom ration. Does Bezos have the worst UTI in history?

big house, long hallway, got 25 bathrooms i can shit all dayyyy

He loves to crap.

imagine how much jeff bezos is going to be spending on toilet paper to keep 25 bathrooms stocked https://t.co/ToGkPbNVHQ

Jeff bezos needs 25 toilets because he has so much diarrhea that he has to sprint from one toilet to the next, leaving a trail behind him like a snail, and it takes 24 hours to clean it

Seriously, who needs a house with 25 bathrooms for 11 bedrooms? A plutocrat named Jeff Bezos thinks he does, and since We the Pee-on People get stuck paying his entire income tax bill year after year, he can "afford" this obscenity on our hard-earned dollars. #AmazonSucks

WISE MAN AT SEMINAR: when you've used a toilet once, it will radiate Nega-Energy for the rest of its life
JEFF BEZOS, CONTEMPLATING: I'll need 25 hot-swappable toilets https://t.co/xyD9idhWVF

architect, winning a bet with his colleagues: now, obviously you need twice as many bathrooms as bedrooms
the richest man in the world: obviously

It almost feels like Bezos demanded a ridiculous number of bathrooms just as a big fuck you to the Amazon warehouse employees who have been pissing in bottles and denied bathroom breaks https://t.co/SjnDAWhFwx