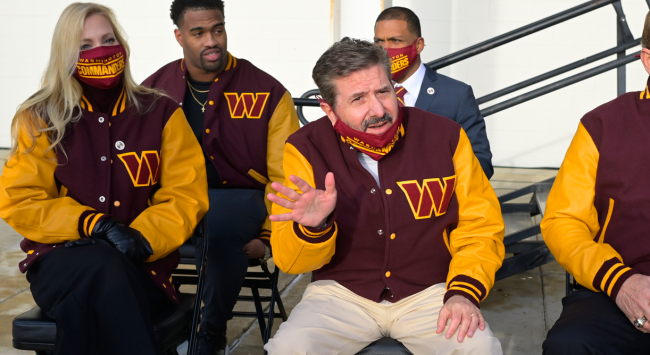 Despite the fact that Jerry Jones doesn’t think Daniel Snyder is serious about selling the Washington Commanders, the fact remains that there are potential buyers out there and he’s talking to them.

The most prominent name being mentioned as a possible buyer is Amazon founder Jeff Bezos.

According to the New York Post, Bezos and Jay-Z “will put in an official joint bid to purchase the team in January.”

The Washington Commanders are valued at $5.6 billion

NFL insider Jay Glazer reported that the asking price for the Commanders will be around $7 billion. Glazer says, “the hope is to have this done within the next six months and actually have it finalized by the NFL owners meeting next March.”

Jeff Bezos and Jay-Z would certainly have no trouble coming up with the money to buy the Commanders, but a new report by Peter King says Daniel Snyder won’t sell it to them.

What wingnut would be dumb enough to invest, say, $1 billion or more to go into business as a minority partner with the worst owner in recent NFL history? Not so fast, I heard over the weekend. I kept hearing, If anyone buys a minority stake, there has to be a clear path to buy out Snyder — in a defined number of years. And, re: the hot candidate to buy the team, billionaire Jeff Bezos, I also heard this from a reliable executive well-versed on ownership matters: “It’ll never happen. Dan Snyder detests the Washington Post. No way he’d sell to the owner of that paper.”

It was the Washington Post that first reported on more than a dozen women alleging sexual harassment and verbal abuse by Washington Commanders employees back in July of 2020.

That report led to the NFL’s investigation into the Commanders’ front office and more former employees making accusations against the team, including more than 30 former cheerleaders.

Among their claims was that a secretly produced explicit video of cheerleaders was created for Snyder. Jon Gruden also reportedly received illicit photos of topless Washington cheerleaders from a team executive.