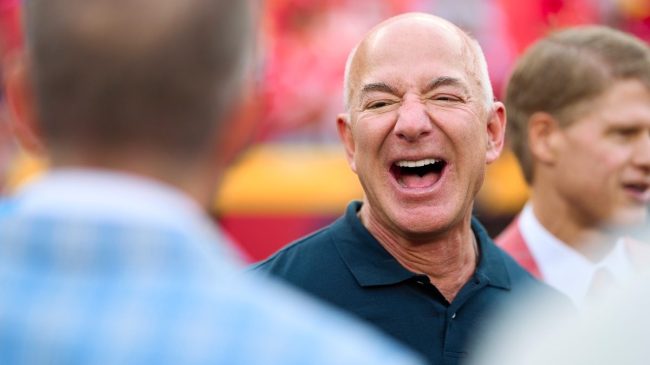 The Washington Commanders continue to be the most dramatic franchise in the NFL. However, that’s all thanks to the current owner Dan Snyder, as his presence is a dark cloud hanging over the organization. With the league clearly wanting Snyder out of the picture, many are pondering who will end up purchasing the franchise. With that in mind, it appears all signs are beginning to point to Jeff Bezos.

During a podcast segment on the Ross Tucker Podcast, Don Van Natta Jr. speculates the possibility of Bezos possibly buying the Commanders. It seems the second-richest man in the might just be interested in becoming an owner of an NFL franchise. He already owns the broadcasting rights to Thursday Night Football, so why not purchase a team too?

Could Jeff Bezos be in the mix to purchase the Washington Commanders?@DVNJr explains on the latest Business of Sports podcast with @AndrewBrandt pic.twitter.com/YVNxSe5lri

This could be the perfect opportunity for Jeff Bezos to own a team. Although Dan Snyder threatens to “expose” Roger Goodell and the league, it’s hard to imagine he remains as the owner of the Commanders for much longer. Especially considering he’s clearly on the outs of the rest of the league, per Don Van Natta Jr.

“That was one of the things that really struck me”@DVNJr speaking about Dan Snyder on the latest Business of Sports Podcast with @AndrewBrandt pic.twitter.com/zs8DEWl7Z6

Additionally, it’s not like buying an NFL franchise would be that big of a deal for Jeff Bezos. The guy is worth over $150 billion while a football organization is worth roughly $5 billion. Certainly, the founder of Amazon can afford that kind of money and the league would likely welcome him with open arms. Despite Roger Goodell hilariously looking annoyed with Bezos at a game.

At the end of the day, the clock is ticking for Dan Snyder. The Commanders are in dire need of new ownership and Jeff Bezos could be the man to take the reigns. Keep an eye on this situation, as rumors may continue to pick up steam.