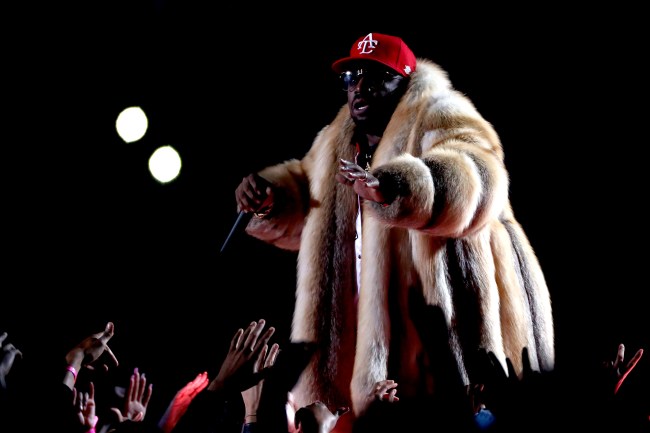 If you want to piss PETA off, wear a cartoonish fur coat in a weather-controlled arena while performing in front of 100 million people. Or eat a burger. Or go to Sea World. Or maybe share this article that calls the organization out for euthanizing the overwhelming majority of dogs and cats that it accepted into its shelters.

Rapper Big Boi succeeded in pissing off the animal rights organization during last night’s Super Bowl, arriving to his halftime performance in a convertible while rocking a fur coat and a red hat that read “ATL.” The Outkast rapper has joined the likes Lady Gaga, Kanye, and Kid Rock who have been publicly blasted by PETA, who used his hit “The Way You Move” as a setup for a dark punchline.

Hey, @BigBoi! The way you move is horrifying when animals have to DIE for your outfit. #SuperBowl #SBLIII #Halftime pic.twitter.com/EG9N7slwxi

I made the mistake of watching a video on PETA’s Twitter account that details how fur is removed from animals and my day is officially ruined. I know I’m too weak and undisciplined to ever give up meat, but I can rationalize that easily. I’m making a solemn vow to you that you will never find me in a coat with animal fur. Unless I’m one half of arguably the greatest rap duo to ever live. Then, fuck you, I’ll do as I please.

Big Boi has yet to respond to PETA’s burn.