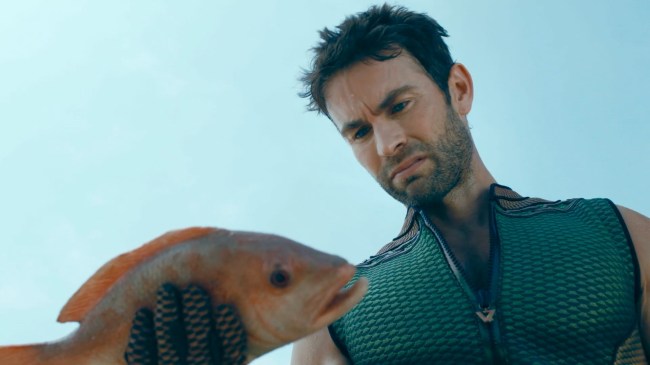 Prime Video’s hit superhero series The Boys is back and better than ever, as its the third season of the beloved show premiered last week.

As we’ve come to expect with The Boys, the first few episodes of season three are chock full of disgusting scenes, including one scene that involves The Deep and an octopus.

The scene was so nasty that even PETA chimed in, but perhaps not in the way you might expect, as the notoriously grump organization actually gave The Boys props!

“The Boys’ real heroes are working behind the scenes, creating a realistic CGI octopus so that animals can live in peace,” says PETA Senior Vice President Lisa Lange. “PETA is celebrating this series for helping viewers see every octopus as an individual like Timothy, not as an entrée or as entertainment.” [via ComicBook]

Here’s a description of the scene in question, by the way (spoiler warning, of course):

During a particularly wild and graphic scene that might turn you off seafood for a while, Homelander pressures The Deep into eating a raw octopus to prove his loyalty. Like Aquaman, The Deep can communicate with sea creatures and has no desire to eat his friend “Timothy,” who The Deep is also sexually attracted to. After some profane prompting from his wife, The Deep grossly devours Timothy and secures his return to the Seven. [via Uproxx]

While PETA usually drives me and the rest of the internet insane, you’ve got to admit that they’re correct about this one.

RELATED: Season 3 Of ‘The Boys’ Will Literally Be 3x Bloodier Than Season 2 – Here’s How We Know