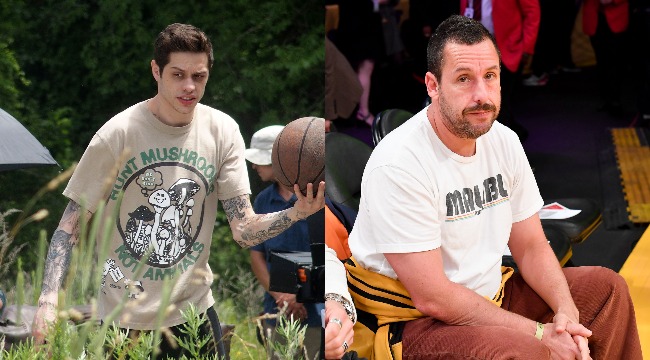 Pete Davidson making it seven full seasons on Saturday Night Live is nothing short of a miracle. That is longer than Adam Sandler and Chris Rock combined.

Damon Wayans was reportedly fired after just one season for the crime of going off-script, while Davidson still collects a paycheck after lambasting the sketch show in February 2020. Add that to reports of star treatment from Lorne Michaels and the allegation that he doesn’t play a major role in the writers’ room, can’t help but think Davidson was a leper in a previous life.

“I’m surprised I made it to seven. I’m ready to hang up the jersey. Kenan’s like fuckin’ Karl Malone out there.”

Re-visiting his scathing comments from last year in which he referred to himself as the “whipping boy” of Saturday Night Live, Davidson claims the pandemic gave him a new outlook.

I was at a really different place a year or two ago. I’m not exactly proud of how I handled or was handling things a few years ago. Looking back on it, you’re like, “Ahh, come on, dude.” Luckily a pandemic happened and I got kicked in the balls and had to sit with all of my immature irrational decisions. I was so happy when they said that SNL was going to come back because I was literally sitting with my own thoughts and I was feeling really bad. I was really excited just to work and see people and I had a different outlook for this season and moving forward. I think I’ve been able to have a lot of fun and I just really appreciate it — not working at all really sucks.

When asked about whose career in show business he admires, Davidson heaped praise on Adam Sandler’s career and perspective.

You get to see a lot of people at SNL, and there’s this aura around Eddie Murphy where you’re just like, “Holy shit, that’s Eddie Murphy.” [Adam] Sandler is like that, too, you just can’t believe you’re seeing him in person. I’d like the Eddie Murphy, Sandler career. I like what Sandler did where he’s like, “These are my eight friends, we’re going to do this formula for the next 30 to 50 years.” He built this entire universe for himself, and he’s in his own lane. That’s the model. Also, the way he carries himself I try to follow. He’s so kind to everyone, and you never hear of a Sandler issue — there’s never like a Sandler-gate. Any time you see that guy’s face, it’s associated with smiles and good vibes. That’s the thing I’m trying to follow.

Judd Apatow directed a movie about Pete Davidson’s life before the age of 30 that was produced by the guy behind The Sixth Sense. He was cast in Suicide Squad. And most importantly, he’s friends with Machine Gun Kelly. The world is Pete Davidson’s oyster, Saturday Night Live or not.