The Guy Who Is (Maybe, We Think) Playing Two-Face Makes Promising Comments About Production Of ‘The Batman’ 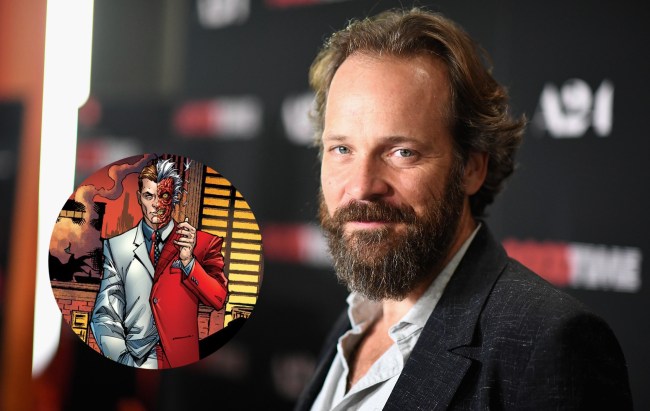 First, some clarification: Peter Sarsgaard’s character has not been confirmed — unlike the roles of the other actors, which were announced in tandem with their casting — so the notion that he’s playing Harvey Dent is merely speculation.

However, when I say “we”, I mean, like, the wider internet — there are many people who think he’s playing Gotham City district attorney Harvey Dent, especially when considering that his wife Maggie Gyllenhaal essentially teased the role on Instagram.

So, with all that said, whether or not you want to believe Sarsgaard is playing Dent is up to you. I chose to believe it because he’s just the type of actor who could play nice-on-the-outside, boiling-rage-on-the-inside-unleashed-through-tragedy. Plus, given that The Batman is supposed to be set in the early stages of Bruce Wayne’s crime-fighting career, it makes sense that Dent would still be a lawyer and not a half-massacred madman.

Now that I’ve gotten that gigantic disclaimer out of the way, I can actually get to Sargaard’s comments, which are just the latest in a long line of examples that Warner Bros. seems intent on not fucking this one up.

Matt directing this Batman [is exciting]. The cast is so awesome. It seems different from other Batman movies to me, just with the cast. There’s something about it that has an edge, it’s young. To me, just my perception of it, it reminds me of when I was in college, and I went to go see The Pixies play, and looking around and feeling the vibe at a Pixies concert. That’s what it felt like to me, a song like ‘I Bleed.’ That it has the energy and that sort of thing, and isn’t so specifically targeted to a very young audience, or a very old audience, but has that power of chaos in it…” [via CinemaBlend]

Anytime I write about The Batman, I make sure to mention that the studio’s casting of well-respected character actors instead of A-listers will ultimately be one of the film’s strongest assets.