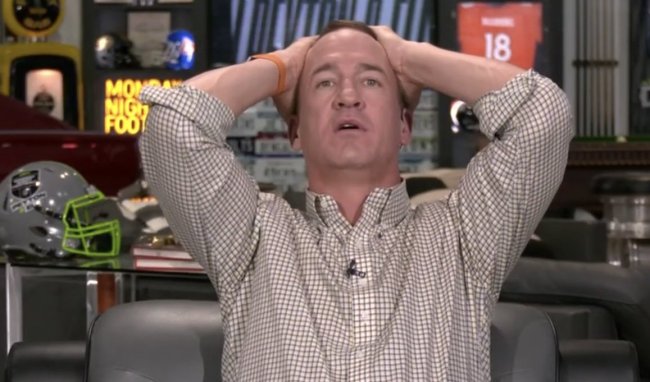 Other than Brett Favre, Peyton Manning was my favorite player to watch when I growing up. I found the machine-like nature of Manning’s brain, and therefore the Indianapolis Colts’ offense, to be simply mesmerizing. It was like watching a computer download and process information in real-time. Manning won his second and final ring with the Denver Broncos when I was in college, and despite being a shell of his former dominant self, it was a much deserved second ring that further validated his career as one of the all-time greats.

It’s now, somehow, already been five years since Manning’s retirement, with the former Colts and Broncos great now immortalized in Canton in the Hall of Fame. And although he has taken on an entirely new profession as a broadcaster/TV host (Peyton’s Places on ESPN+), he’s once again on his way to becoming one of the greats in the space, as the Manning Brothers’ Monday Night Football telecast — largely carried by Peyton and his unrivaled football knowledge — has been nothing short of a revelation just two weeks into its existence.

Yes, Eli Manning’s ribbing of his big brother’s giant forehead — and his general, always-underrated laidback vibe — has been hilarious every time it happens, and yes, the guests — from Gronk to Pat McAfee to the aforementioned Brett Favre — have added some spice to the show, but when it comes to the program’s greatest strength, it’s unquestionably Peyton’s investment in the success of the quarterbacks to such an extent that he appears to be living vicariously through them.

there’s no other way to say this.

Dude watch Peyton’s eyes as he looks at his screen.
They’re all over the place—just like he would be on the field—trying to see every single piece of information.

I find it fascinating

*The QB makes any sort of mistake*

Peyton Manning: “Every time I played New England, I used to go and talk to my receivers in the shower… Don’t talk about a play next to my locker because I know it’s bugged.” #mnf

On that last TD throw by @AaronRodgers12 ..
Eli: “ he had no option but to catch that throw”

Peyton: “ the ball caught him”.

Give me all of this

"Every time I played against New England, I used to talk to my receivers in the showers. Don't talk about a play next to my locker because I know it's bugged. I know it's got a hot mic in there. Very strange to see 7 guys hanging out in the shower." – Peyton Manning

I absolutely love how disgusted Peyton gets with everybody

Given the immediate and massive success of the Manning Brothers simulcast, it’ll be fascinating to see how ESPN handles the pair going forward. Personally, despite how much I’ve been enjoying the commentary, I would still prefer to see them paired with a traditional broadcaster to fill dead air. Literally, that’s all he does. Asking Peyton to both commentate, keep guests engaged (*cough Gronk cough*), AND give analysis is asking a lot. With a traditional broadcast in the mix, Peyton could be free to do what he does best while someone else is tasked with getting Gronk to say more than “Yeah, totally, dude.”

This is so great. Gronk is basically like, “Peyton, I really don’t give a shit.” pic.twitter.com/koDeeBDtmK

Peyton is talking about strategy vs alignments and asking Gronk and he clearly has no idea what any of it means just says oh yea for sure.

Gronk saying beautiful to Peyton asking him a question. Like when someone is telling you a story that you don’t give a fuck about and then you have to day something when they finish talking.

RELATED: Peyton Manning Takes A Shot At The New England Patriots For History Of Cheating On Monday Night Football