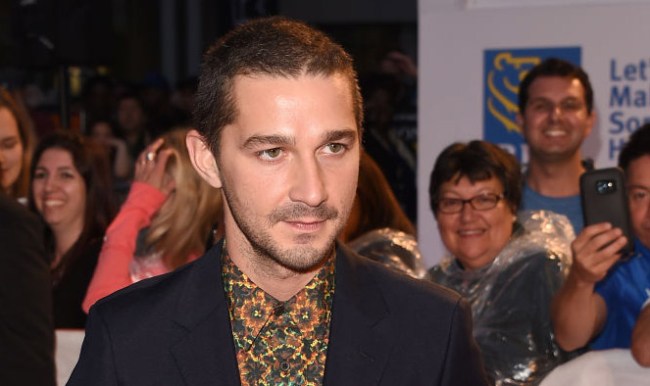 He’s back! Our favorite extreme method actor (sorry, Jared Leto) slash performance artist Shia LaBeouf is back on set for the first movie role we’ve seen him in since Borg vs McEnroe. (Well, a few of us saw him in. Okay, a handful…in Sweden.)

Unlike the other film LaBeouf has coming out soon, Honey Boy, based on his own life, (Shia LaBeouf will be playing his own father in a movie. So perfect. His nickname as a kid was Honey Boy.) this movie, The Tax Collector, has some real box office potential.

And speaking of Jared Leto, no, this photo that the director of The Tax Collector (and Suicide Squad) David Ayer shared to Twitter is not Leto in his role as the ultra-EDGY Joker, but is actually LaBeouf in character for the film.

Yes, that giant stomach tattoo reads, “Creeper.” No word yet on how many of those tattoos are actually real, which is a legitimate question knowing how LaBeouf operates as an actor.

Some of you may remember (none of you will remember) that Ayer and LaBeouf almost worked together on Suicide Squad (yes, really).

Ayer had approached LaBeouf about playing Lieutenant GQ Edwards in the movie, but because of his ongoing run-ins with the law at the time, and beyond, the role ended up going to Scott Eastwood.

“The character was different initially,” LaBeouf told Variety in 2016. “Then Will [Smith] came in, and the script changed a bit. That character and Tom [Hardy’s] character [later played by Joel Kinnaman] got written down to build Will up. I don’t think Warner Bros. wanted me. I went in to meet, and they were like, ‘Nah, you’re crazy. You’re a good actor, but not this one.’ It was a big investment for them.”