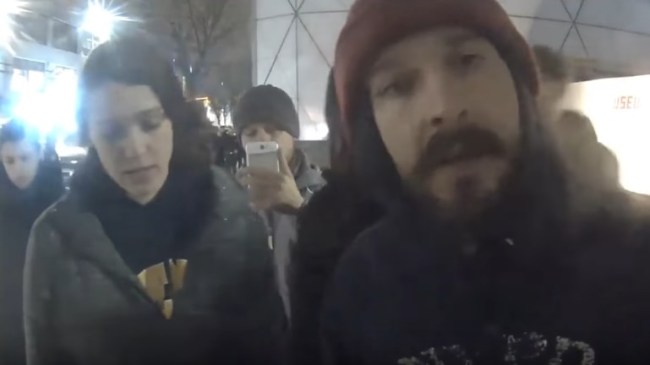 The greatest real-life game of “Capture the Flag” has gone international. In January, Shia LaBeouf began his anti-Trump art project titled “He Will Not Divide Us” in New York City, which resulted in his arrest and the Museum of the Moving Image shut it down due to violence. Shia moved his art project to Albuquerque, New Mexico. However, less than a week after the livestream started it was taken down. The “HWNDU” project was then moved to an undisclosed location, but crafty and rather genius trolls at 4chan were able to track it down in Tennessee and replace it with a “Make America Great Again” hat. Shia has seemingly given up on his flag being flown in the U.S. and moved the project to the United Kingdom, but that was foiled real quick.

A statement from the actor’s artistic group of LaBeouf, Luke Turner, and Nastja Säde Rönkkö explained that they felt the United States was not a safe place for their flag.

“Events have shown that America is simply not safe enough for this artwork to exist.”

LaBeouf announced on his Twitter that the flag has been moved to the Foundation For Art And Creative Technology (FACT) in Liverpool, England where it was to be livestreamed 24 hours a day, seven days a week.

A mere 24 hours later, the flag has already been taken down.

>Shia puts flag on roof of museum in another country.
>/pol/ finds a way. pic.twitter.com/tznCSqhgCh

F.A.C.T. said that it was too dangerous to keep the flag up.

On police advice, FACT and LaBeouf, Rönkkö & Turner have removed the installation HEWILLNOTDIVIDE.US due to dangerous, illegal trespassing.

The stream has been shut down once again and it appears that England is also “not safe” for art projects.

The project is said to last for the duration of President Donald J. Trump’s four-year term or until trolls cause Shia to lose his shit.