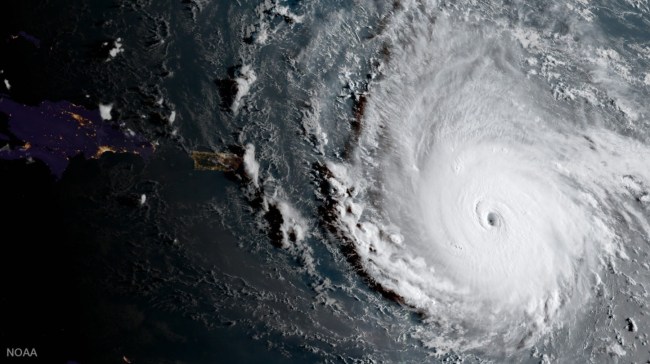 Hurricane Irma, one of the most powerful storms ever recorded in the Atlantic Ocean, has caused widespread destruction to the islands in the Caribbean in only a few days. The cataclysmic Category 5 hurricane has smashed islands with its fierce winds that are as strong as 185 mph. The massive and powerful hurricane has left a path of destruction from Barbuda to the U.S. Virgin Islands to Puerto Rico as it has its sights set on Florida. The magnificently dangerous storm has ripped roofs off of buildings, destroyed airports, and left tens of thousands homeless. The death toll from Hurricane Irma is at at least nine in the Caribbean, but that number is expected to rise rapidly once people dig out of their demolished homes.

The tiny island of Barbuda, with a population of approximately 1,400, was reduced to “literally rubble” after the storm passed through. Gaston Browne, the Prime Minister of Antigua and Barbuda, said around 90% of the nation’s structures and vehicles have been destroyed and 50% of the population is now homeless.

My heart breaks for #Barbuda pic.twitter.com/WWJ80yVQRj

This is the path of destruction left by Hurricane #Irma in the Caribbean #SNT pic.twitter.com/mkPqdcpcNF

Horrible news turns even worse now that Hurricane Jose is now a Category 3 storm and is expected to hit Barbuda and Antigua.

Hurricane Jose has rapidly intensified into a major hurricane. It is "only Category 3" yet pales in comparison to monster Category 5 #Irma pic.twitter.com/vDY5K92VHK

#Jose became our 3rd major hurricane of the season. Watches have been issued for Antigua & Barbuda… already decimated by #Irma. @PIX11News pic.twitter.com/AaFOXrOHl7

The massive and powerful hurricane obliterated St. Martin. Top local official Daniel Gibbs said the island was “95 percent destroyed” and “an enormous catastrophe.” The intense 185 mph winds have smashed their world famous Princess Juliana International Airport which used to have a beach at the end of the runway.

Airport St. Martin unreachable at the moment. High priority for the delivery of help and supplies. #Irma pic.twitter.com/7I8Qqmauvj

Via Jonathan Falwell on St Martin: No power, no water, everything destroyed. Buildings gone. Please pray as this island is decimated. #Irma. pic.twitter.com/Gu5iwgUX4P

The roar of the wind was unbelievable as #HurricaneIrma tore through Sint Maarten early this morning. The latest: https://t.co/3U8rf9yXIy pic.twitter.com/8ZpDemhVb7

Here is the before and after photos of picturesque St. Martin reduced to rubble in many places.

As was St. Thomas.

Puerto Rico suffered some damage, but Hurricane Irma traveled north of the U.S. territory, sparing it from a catastrophic leveling that other islands suffered. Three people died in Puerto Rico and over 1 million inhabitants of the island are without power. A Delta airplane did escape Irma’s wrath in the nick of time.

Nearly 900,000 people are now without power in Puerto Rico as Hurricane Irma plows through the Caribbean: pic.twitter.com/6iBSnkYhIs

Hurricane Irma is currently north of the Dominican Republic and the eye of the storm is heading directly towards Turks and Caicos on Thursday night and then the Bahamas. After that the storm looks to have a direct hit with Florida and some analysts are saying that Irma could cause approximately $100 billion in damage in the United States alone and has the potential to be the most expensive Atlantic storm in history.

A hurricane watch has been issued for South Florida and the Florida Keys. More information available at https://t.co/tW4KeGdBFb pic.twitter.com/SzlkILQj0h

Don't focus on the exact track of #Irma. There is a high probability of trop storm and hurricane conditions well away from the center. pic.twitter.com/U1rwqtANCP

That's a significant shift west over Florida by the Euro ensembles at midday. Not good for Florida. #Irma pic.twitter.com/VX1eEyH3zC

Hurricane #Irma has left a trail of destruction in the Eastern Caribbean. Here's what could come next pic.twitter.com/ebotuvxvDW

"There is a picture of Irma. It's enormous. You could fit Texas in that," meteorologist @LonnieQuinnTV says in his forecast. pic.twitter.com/fL7V9D20zb

After seeing these photos, if you are instructed to evacuate your area then you should definitely do so.