Want To Survive The Inevitable Zombie Apocalypse? Real, Actual Physicists Researched What To Do 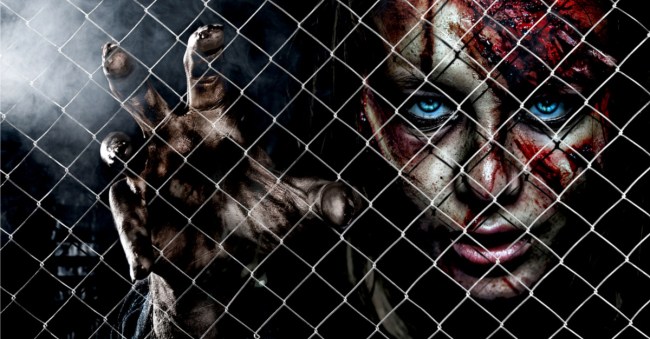 No joke, real physicists have done research on what would happen, and how to survive the zombie apocalypse we all know is coming some day. And there’s not just a little bit of research either. Apparently this is something that people way smarter than me have devoted a LOT of time and resources towards studying. Now who says we humans don’t have our priorities right?!

A team of Cornell University researchers actually presented their findings on the subject to the American Physical Society, the world’s second largest organization of physicists, and basically if you are in a large city when the zombie apocalypse hits then you’re pretty much screwed.

Alex Alemi, one of the students who worked on the research explained why big cities are the worst place to be (via EurekAlert)…

In most films or books, “if there is a zombie outbreak, it is usually assumed to affect all areas at the same time, and some months after the outbreak you’re left with small pockets of survivors,” explains Alemi. “But in our attempt to model zombies somewhat realistically, it doesn’t seem like this is how it would actually go down.”

Cities would fall quickly, but it would take weeks for zombies to penetrate into less densely populated areas, and months to reach the northern mountain-time zone.

“Given the dynamics of the disease, once the zombies invade more sparsely populated areas, the whole outbreak slows down–there are fewer humans to bite, so you start creating zombies at a slower rate,” he elaborates. “I’d love to see a fictional account where most of New York City falls in a day, but upstate New York has a month or so to prepare.”

Here’s approximately how far the zombies will have spread from New York City after only a couple of days using an amazing interactive model they created. (Seriously, it’s really cool. You can plug in any town as see how the zombies spread.) 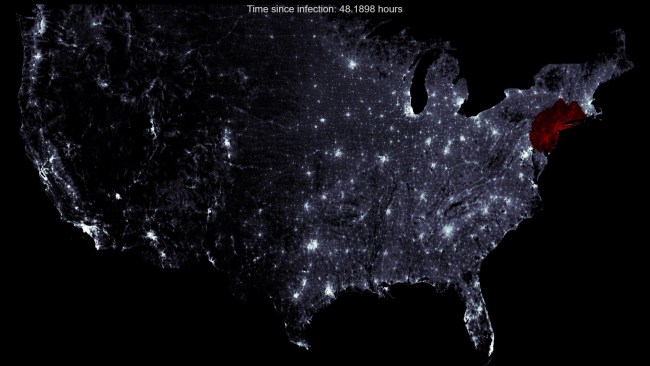 As you can see, The Big Apple didn’t last long. 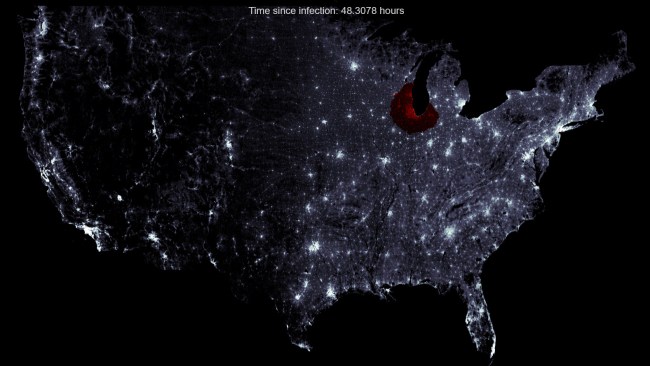 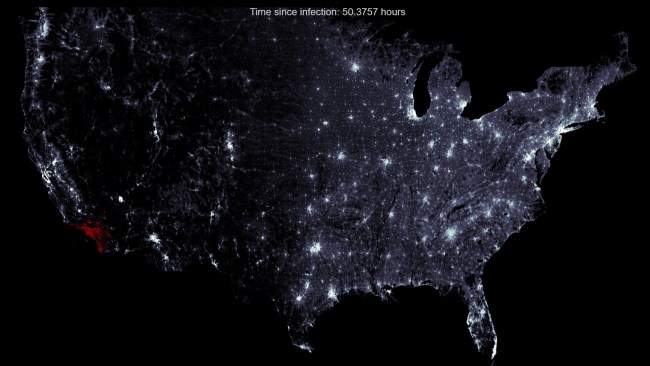 So what do we do?

If you somehow happen to find yourself in the midst of a fictional zombie outbreak and want to survive as long as possible, Alemi recommends making a run for the northern Rockies.

Head for the Rockies… hmmm… where have I heard something like that before? Oh yeah…