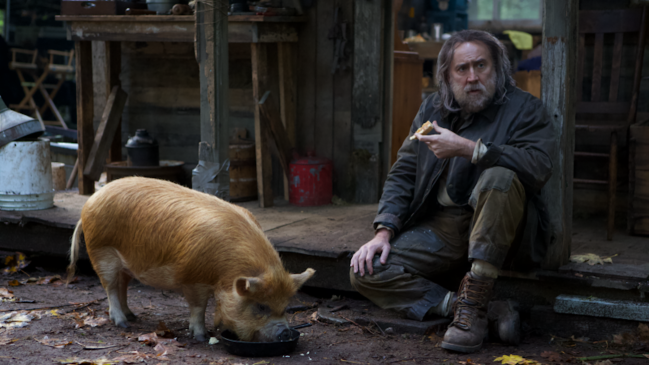 Every time I’m writing about Nicolas Cage, I feel obligated that the man is an Academy Award-winning actor. It’s now been about a quarter-century since Cage took home the Oscar for Best Actor, which surely means there’s a large percentage of the population out there that only sees him as nothing more than the gonzo arthouse B-movie star he’s become in the last decade or so. Yes, while he’s become something of a caricature of himself, there remains a highly talented actor in there, and apparently his newest film Pig — yes, Pig — was able to bring that talent back out of him.

Hitting theaters tomorrow — Friday, July 16 — the Michael Sarnoski-directed thriller about an Oregonian truffle hunter in the Oregon wilderness who returns home to find that his beloved pig has been stolen currently boasts a wildly impressive 98% critics score on Rotten Tomatoes, with journalists particularly performing the lead performance of Cage.

“Like the animal itself, Pig defies the hogwash of expectations with a beautiful odyssey of loss and love anchored by Nicolas Cage’s affectingly raw performance.” [via Rotten Tomatoes]

For context, Orson Welles’ iconic Citizen Kane, widely considered to be one of, if not the greatest American film ever made, has a 99% critics score on Rotten Tomatoes. Granted, while the controversial review aggregator is far from the end-all-be-all of movie criticism, it does give you a good idea of the general conversation surrounding a film.

What’s next for Nicolas Cage?

Cage’s penchant for truly insane plots doesn’t appear to be subsiding anytime soon, as he will next star alongside Pedro Pascal, Tiffany Haddish, and Neil Patrick Harris in 2022’s The Unbearable Weight of Massive Talent, which will see Nicolas Cage star as himself in a film about Nicolas Cage having to reenact famous Nicolas Cage characters for a Mexican billionaire (Pascal) who has taken his family hostage.