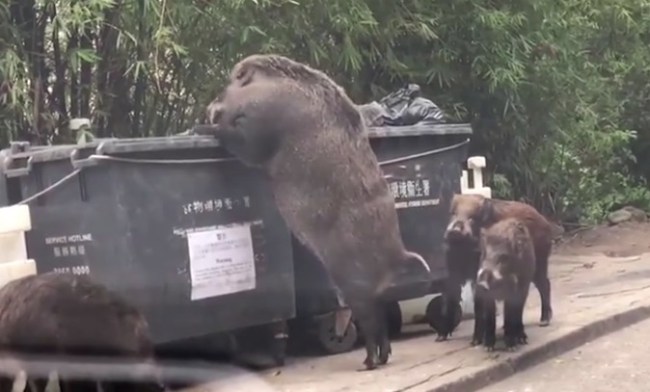 Footage of a (probably mutant and) freakishly gigantic wild boar in Hong Kong has gone viral. The boar has been nicknamed ‘Pigzilla’ by the media, a reference to the infamous ‘Hogzilla’ which was photographed in America years ago and the subject of several TV shows which probably aired on the Discovery Channel and Animal Planet.

Pigzilla has taken the media by storm. You can already find hundreds (thousands?) of versions of this clip on YouTube from CBS, FOX, the Daily Mail and more. Everyone’s taken aback that a wild boar this large is just out there cruising dumpsters with three little pigs in tow, and this boar is so f’n large that it can just lean up against the dumpster and eat trash like a dude leaning against the bar and sipping a beer.

The gargantuan boar nicknamed Pigzilla was filmed near a school in Hong Kong and it can be seen ravaging the dumpster while scrounging food for himself and his three piglets:

Here’s the same clip with some additional commentary:

This wild boar doesn’t scare me all that much. He’s just out there trying to feed his kids and be a good dad. You know which wild boars scare the ever living shit out of me? The mutant Fukushima wild boar who have been living in the radioactive wasteland since the 2011 earthquake and subsequent tsunami caused a power plant failure. There are literally radioactive mutant boars on this planet and we’re just living our day to day lives like that’s okay.