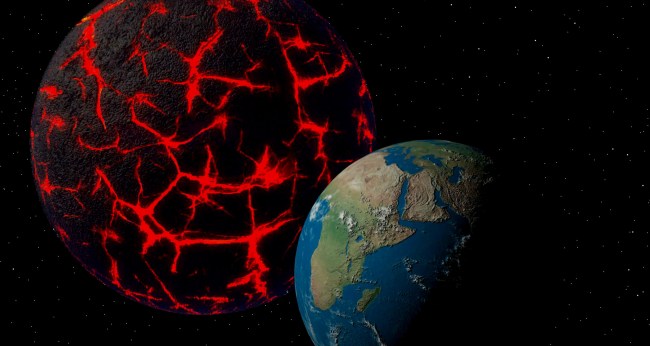 One of the many theories surrounding the current global pandemic is that Nibiru, AKA the hidden doomsday Planet X, has something to do with it. (We all know it’s because of aliens, but let’s just set that aside for the moment.)

For those unfamiliar, Nibiru (also known as Wormwood or Planet X) is, according to Wikipedia, “a supposed disastrous encounter between the Earth and a large planetary object (either a collision or a near-miss) that certain groups believed would take place in the early 21st century.”

According to a recent report by the Daily Express,, “Planet X or Nibiru is believed by many to be a rogue planet, brown dwarf star or entire planetary system that orbits the Sun every 3,600 years. Purveyors of the Nibiru conspiracy theory believe the planet will arrive near Earth one day, heralding the imminent apocalypse.”

So yeah, Nibiru could be a problem.

The planet was first discovered by a woman named Nancy Lieder in 1995 who claimed to have the ability to receive messages from extraterrestrials from the Zeta Reticuli star system through an implant in her brain. Very reasonable.

However, as I pointed out in my previous article about Planet X and was mentioned above, “Nibiru only orbits our Sun and passes by our planet once every 3,600 years so there’s a certain margin of error with predictions such as this.”

That being said, last week, according to numerous reports on social media, Nibiru has returned and been spotted once again, this time in the skies over Japan.

“Praise be our almighty Heavenly Father , God Bless all,” wrote one viewer.

“These are NOT flares because they are to yellow, flares are more whiter with hot centre. Alex do you notice what is on the bottom of these anomalies, its plasma and shaped like a hand or spiral. Look back in the reset art around 18-19c and these look familiar,” wrote another commenter.

Space.com calls Nibiru “The Nonexistent Planet” and states “The easiest and most verifiable piece of evidence arguing against the existence of the theoretical planet can be performed by anyone: According to the information available, a planet with a 3,600-year-long orbit that was due to impact Earth in 2012 should be available to the naked eye. Easily performed calculations show that, by April 2012, it would have been brighter than the faintest stars viewed from a city, and almost as bright as Mars at its dimmest. This would have made it visible to astronomers everywhere.”

See though, that’s the key. It’s called the “hidden” planet for a reason, only appearing when the apocalypse is about to occur.

Have you followed the news lately? The apocalypse isn’t already in progress?

NASA claims “Planet X can’t possibly exist because its gravitational forces would have already stripped Earth of its moon.”

Right… That’s what they want us to think.

Previously…
• Conspiracy theorists tie Nibiru, AKA hidden doomsday Planet X, to the current pandemic
• Planet X Nibiru Will Appear On April 23 To Signify The End Of The World, So Plan Accordingly
• Planet X Is Still Coming To End The World, World Leaders Are Just Covering It Up, Say ‘Experts’
• Mark Your Calendars, The World Is Going To End On November 19th… No, Really, It Is This Time
• Heads Up, An Asteroid From A Hidden Planet Is Going Hit Earth Causing A Devastating Tsunami NEXT MONTH!
• Doesn’t Matter Who’s President, Because A Rogue Planet Is Heading For Earth To ‘Destroy All Human Life’