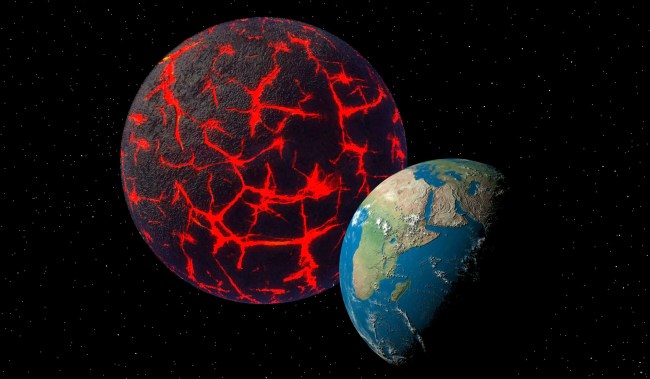 If you aren’t familiar with Nibiru, also known as Planet X, well then, it’s time for you to get enlightened.

This will be the sixth time over the past three years I have written about the hidden planet Nibiru – a hidden planet that once it appears will signify the apocalypse on planet Earth is nigh.

Here’s the scoop. Nibiru, also known as Wormwood or Planet X, was first discovered by a woman named Nancy Lieder in 1995 who claimed to have the ability to receive messages from extraterrestrials from the Zeta Reticuli star system through an implant in her brain. It’s true. Look it up. Impressive, right?

Well, according to her, something called the Nibiru cataclysm was supposed to occur in 2003 where the rogue planet, which is anywhere from four to 10 times the size of Earth, would be involved in a massive, extinction-level collision with our planet.

And while the Armageddon timetable for Nibiru has been more than a little fluid – it was also supposed to happen again in 2012, 2017, 2018 and 2019 – Nibiru only orbits our Sun and passes by our planet once every 3,600 years so there’s a certain margin of error with predictions such as this.

Essentially, Nibiru is believed by many to be a planetary companion to our sun and just like Earth and the planets of our solar system, Nibiru and the sun are part of another solar system and in orbits of their own around an even bigger sun, which is why it’s been hundreds of years since it last passed Earth.

Internationally acclaimed author and researcher Zecharia Sitchin pinpointed the last time Nibiru passed by Earth at 556 BC, which technically could mean it won’t hit us until around AD 2900. Like I said, fluid.

However, according to another expert on such things named Marshall Masters, there is also a tenuous connection between the coronavirus and Planet X, or PX as he likes to call it.

“The common man is lucky to see Planet X these days, although our governments have tracked the approach of the Planet X system for decades,” he writes on his web site.

Of that I have no doubt.

“To understand the Coronavirus – Planet X connection, this is where we begin,” he continues. “All of the dancing about the chairs is about power. Whoever is in power when Planet X transits our system will be in power afterward. It is a winner-take-all contest, and if you do not have a chair picked out when the music stops, so do you.”

Masters goes on to explain how “the coronavirus is a false flag to wreck the economy so that Trump loses the election,” but insists that it is still a positive.

“This is turning into a preparatory event for what is coming in the future, which is a good thing,” he writes. “As perverse as these politics are inevitably we will have a better outcome overall because mechanisms are now being put into place to deal with things.”

Which in turn means, “In chaos is opportunity, and when all is said and done, it comes down to who is the king of the hill when Planet X comes around.”

You know what? I hadn’t even considered this not-at-all unbelievable angle. I have been so wrapped up in trying to figure out if aliens are behind the current worldwide pandemic, and are now monitoring our world to see if and how we handle it, to realize this all happening now is great preparation for the coming of Nibiru.

Nibiru being on approach with Earth could also could help explain the flurry of recent UFO sightings.

Even if NASA has stated on numerous occasions, “Planet X can’t possibly exist because its gravitational forces would have already stripped Earth of its moon.”

Previously…
• Planet X Nibiru Will Appear On April 23 To Signify The End Of The World, So Plan Accordingly
• Planet X Is Still Coming To End The World, World Leaders Are Just Covering It Up, Say ‘Experts’
• Mark Your Calendars, The World Is Going To End On November 19th… No, Really, It Is This Time
• Heads Up, An Asteroid From A Hidden Planet Is Going Hit Earth Causing A Devastating Tsunami NEXT MONTH!
• Doesn’t Matter Who’s President, Because A Rogue Planet Is Heading For Earth To ‘Destroy All Human Life’