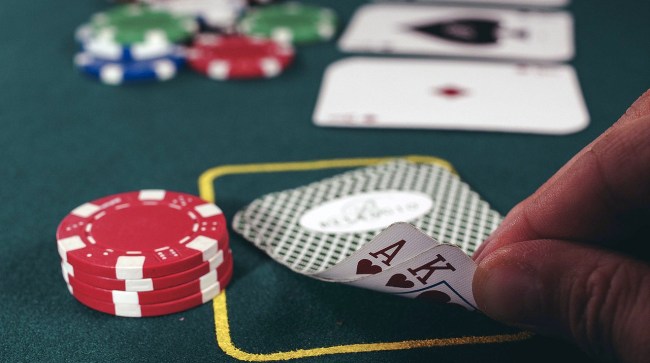 For example, pro poker players Rich Alati and Rory Young have made one of those infamous “How much money would it take for you to ___?” bets, which involves Alati havng to stay in a pitch-black bathroom for 30 days straight without any communication with the outside world. See what I mean? Anything.

If he succeeds, and he’s already inside the bathroom somewhere in Las Vegas as we speak, Alati will receive a cool $100K from Young. If he gives up and doesn’t make it the 30 days, Young gets the cash.

A heads-up match between Rory Young and Rich Alati has turned into the $100K prop bet that everyone in poker is talking about.https://t.co/GbYSDn3A27

Now, if one of your first thoughts was, “that can’t be a good for his health,” you’re not alone.

“One day, there was this young dude sitting at an empty table with like $40,000 in front of him and I sat down and we started playing heads up,” said Young. “We started getting along okay and then over the next couple of days we were talking at the table and stuff. I play a lot of Lodden Thinks and this is one of my go-to questions, ‘How long do you think you could last in a dark room, with no human interaction?’”

Young has heard all kinds of answers and believes most people often overestimate their own abilities when answering. Responses are usually in the 20-25 day range, but Young says Alati surprised him with his answer of 30 days.

“I was like, ‘Oh, that’s interesting – would you ever consider putting any money on it?’ and he said, ‘Yeah, but it would have to be a large amount to make it worthwhile,’” said Young, who found out that amount meant somewhere between $50,000 and $100,000. “We talked a little bit more and within an hour we had something booked.”

There are five night-vision cameras broadcasting around the clock and the only privacy Alati gets is when he’s in the shower or the toilet cubicle. Alati’s family and a few select others have access to the feed.

Surely Alati prepared in advance to attempt this… unique task, right? Of course he didn’t.

“He spent, I believe, 10 minutes in a dark bathroom,” said Young. “He was in the Bahamas for the partypoker event, flew back, and within 24 hours he was in the bathroom. He hadn’t prepared any of his food, he hadn’t gotten anyone to bring his food in, so I’ve had to do it. I think he’s done zero preparation.”

The around-the-clock footage is being recorded and Young and Alati are hoping to turn it into a reality show and find a home for it once all is said and done.

One of those watching the live feed is Alati’s sister. Young has talked to her on a near-daily basis since the bet started on November 21. Not surprisingly, his sister, a lawyer, tried to get him to back out and just give up the $5,000 [he had put in escrow for the bet].

“They tried to get him to not do it but he doesn’t listen to anybody but himself. She tried very hard to get him to pull out and he wasn’t having it. She’s pretty worried,” said Young, who admits to having some worries over potential health issues for Alati during and after the bet.

As if that wasn’t crazy enough, another professional poker player, Huckleberry Seed, now says he wants to try the bet, but for more money and with much more difficult living conditions.

“The other night, I get a phone call from a random number and it’s Huckleberry Seed. Long story short, he wants to do it for a million, but he wants much tougher conditions,” said Young, who said he’d consider taking the former WSOP Main Event champ up on the offer if a broadcast partner or other third party put up some of the money. “[Seed] said he wants to do it with no bed, no food for the first 21 days, he’d do it for a total of 40 days, and just water. Also, he said I could put some cockroaches in the bathroom.”

Told you pro poker players were a “little bit” crazy.