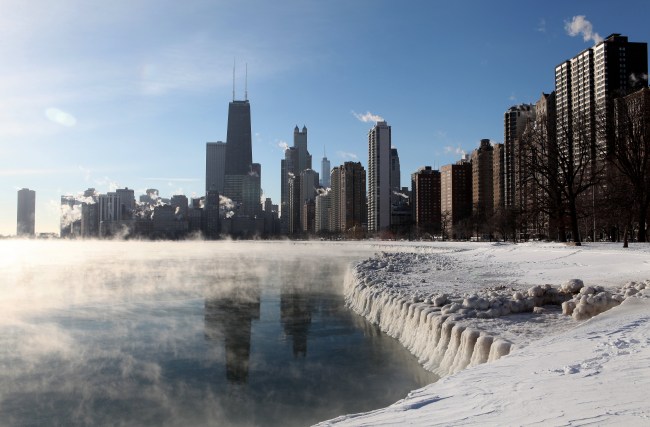 Winter is here in a big, big way. All across the U.S., temperatures will plummet to record-breaking lows as the 2019 polar vortex ices much of the country and some places will be even colder than Mount Everest, Siberia, and Antarctica. Bone-jarring cold from the North Pole will sweep into the U.S. and freeze parts of the Midwest and East.

This center of the "polar vortex" enters the Lower 48 and tracks through Minnesota, over Chicago and Detroit before weakening & retracting into Ontario.

The temperatures will be dangerously frosty and exposed skin can get frostbite in less than 10 minutes, plus there is a chance for hypothermia. The National Weather Service called the chilling weather “possibly life-threatening.” Wisconsin Governor Tony Evers declared a state of emergency because of the brutal cold and snow. Illinois Governor JB Pritzker warned of a “potentially historic winter storm that will bring extreme cold to our state.”

Here's what happens to boiling water in bitter cold temperatures! This was Saturday morning in Oconomowoc when it was -20! #wiwx pic.twitter.com/WzCk1OAgjP

-12 Degrees
The high temperature in Chicago will -12 degrees on Wednesday. For comparison, the South Pole will have a high temperature of -4 and Barrow, Alaska, the northernmost point in the United States which is in the Arctic Circle will have a high of 7 below zero. Wednesday’s -12 in Chiberia would break the record for the coldest temperature ever in the Windy City, which was -11 set on January 18, 1994, and December 24, 1983. Chicago Public Schools have already canceled classes on Wednesday because of the potentially record-low cold.

Downhill slide –> 🌡️
By Wednesday morning, Wind Chills will bottom out at -54°F in Minneapolis. pic.twitter.com/kP60e5hUbP

250 Million People
It isn’t just people from Chicago who will feel the cold. The frigid air from the 2019 polar vortex will be widespread and 250 million Americans or 77% of the continental U.S. population will experience freezing temperatures by the end of the week and 90 million will be subjected to below-zero temperatures.

3,480 Flights Canceled
The extreme weather has caused more than 3,480 U.S. flights to have been canceled through Wednesday.

2 Deaths From The Cold
Despite the worst glacial air still to come, there have already been two deaths from the deadly weather. A 22-year-old man in Rochester, Minnesota, died from the single-digit temperatures and a man from Libertyville, Illinois, was killed after being hit from a snow plow.

8 People Robbed Of Coats In Chicago
Since last week, there have been eight people in Chicago robbed of their coats. All of the robberies involved Canada Goose jackets, which celebrities such as Drake and Kate Upton have donned and cost between $500 to $1,700. No arrests have been made regarding the armed coat robberies.

2 Inches Of Snow In Atlanta
Only days before Atlanta hosts the 2019 Super Bowl, the Athens of the South is expected to get two inches of snow. The slight coating of snow has already closed all Georgia state offices on Tuesday and Atlanta opened emergency warming centers as temperatures hit 21 degrees on Tuesday morning. Temperatures will rebound by Super Bowl Sunday when it will be mostly cloudy with a high temperature of 63 degrees when the New England Patriots are set to face the Los Angeles Rams at Mercedes-Benz Stadium. There is even snow in Tuscaloosa, Alabama.

Expect another bitter cold spell within seven to 10 days.

As the calendar flips into February, the Lower 48 gets a welcome repreive from the Arctic air. The polar vortex feature heads away into Quebec & then the Atlantic while more mild Pacific origin air arrives.

Chance of another (weaker) cold shot in ~7-10 days pic.twitter.com/iYAcuiBbhK

Here is an explainer on what the polar vortex is.

For those that wish to know a little more about the Polar Vortex, NOAA has a website for you. It's a very large scale feature whose fringe is defined by the jet stream. https://t.co/T5ELLnfQif pic.twitter.com/3EGFxOLvX9