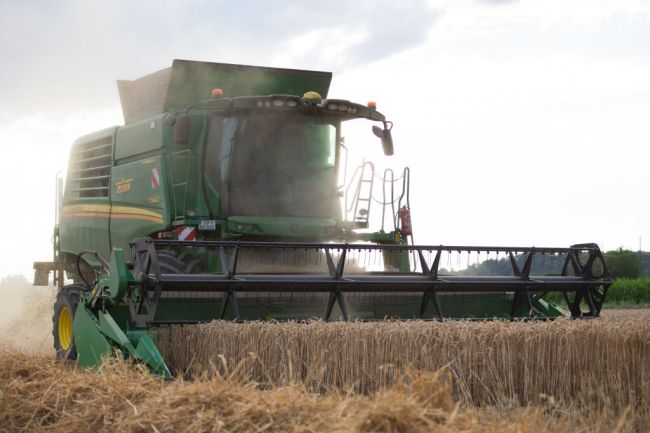 Michal Myslowski wanted nothing to do with the continued development of his once-rural Polish city and refused to sell his land. As a result, the farmer harvests his field surrounded by apartment complexes and it makes for quite the sight.

A video has recently gone viral that shows Myslowski driving his combine through a field of wheat just a stone’s throw from neighboring properties. His grain-harvesting machine seems incredibly out of place but that’s what makes it so great.

As new-build complexes go in, Myslowski’s harvest serves as a middle finger to the man.

In Lublin, arable fields cover nearly 4,000 hectares (just under one third of the entire city) and there are about 2,800 farms. Winter wheat is most often sowed in the region and there are more pigs than trolley busses.

Of those 2,800 farms in Lublin, Myslowski’s might be the most unique. His field of what appears to be wheat divides the Jantarowa Street complex that was built in 2015.

With apartments lining either side, Myslowski’s land splits right down the middle.

Although the builders were likely frustrated by the lack of sale, the residents who live in the apartments have no complaints. In fact, some of them greatly enjoy the view.

Myslowski, year round, can often be seen tilling his land, planting seeds and tending to his crops from the windows and balconies. While the dust and noise might be a downfall, it sure beats looking out at concrete or into a neighbor’s window.

And during harvest season, it makes for a surprising but pleasant view of the agricultural system.

Myslowski says that he has no intentions of selling his land and will continue to work the land so long as he is able. Take that, corporate Poland.