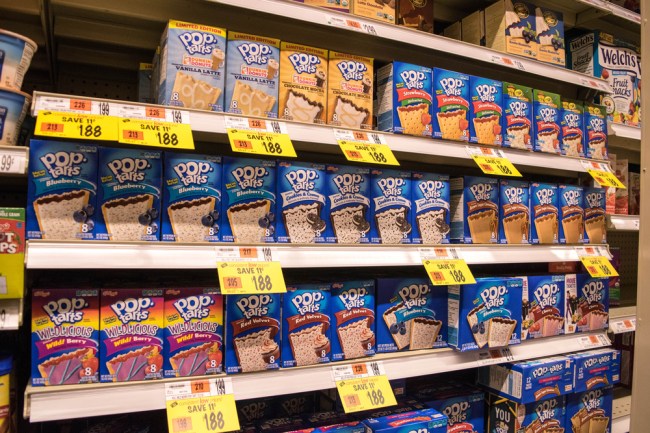 We’ve seen some pretty outlandish food combinations over the years that have nauseated the masses. There was the individual who dunked their pizza in milk and a pizza topped with strawberries. Now we have a Pop-Tart and cheese sandwich that was so criminal that Iowa’s state police got involved.

Last Thursday, Iowa State University sophomore Chris Jorgensen set Twitter aflame by sharing a photo of his culinary monstrosity. He created a sandwich with strawberry Pop-Tarts as the bread and a slice of cheese in the middle. The tweet went viral after the masses were horrified by the grotesque food mutation. Bone apple tea!

You ain’t from Iowa if you never had one of these 😤 pic.twitter.com/KSHyLD0mhv

The unpalatable tweet went viral and caught the eye of the Iowa State Police and they rightfully took the proper course of action against Jorgensen by telling him that he was “under arrest.”

A Pop-Tart cheese sandwich could possibly work by using a nice chèvre or brie cheese, but definitely not with a slice of the super processed Kraft single cheese product. To make things even more offensive, the gentleman did not actually use official Pop-Tarts, instead he used cheap knockoff toaster pastries.

Anthony Greiter, the police department’s Community Outreach Specialist, said, “After some discussion, we came to the determination that Chris probably needed to go to jail for this.” For better or worse, Jorgensen did not actually eat this stomach-churning amalgamation. “I did not put cheese on a Pop-Tart with the intent of eating it as a snack I would enjoy,” Jorgensen told Munchies. “The reason I put cheese on it was to play into that joke I’ve seen on Twitter before.” So you can all sleep easy knowning that no sane person actually ate a Pop-Tart and cheese sandwich. Sad news for the more than 620,000 people who liked the Iowa State Police’s tweet saying Jorgensen was “under arrest,” he was not actually put in jail. He is still walking the streets as a free man and able to create more food terrors.