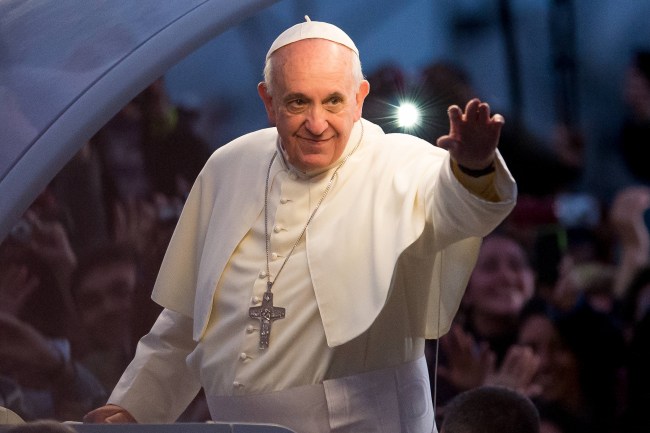 How is your 2020 going so far? On the bright side, you’re probably having a better New Year than the Pope. The 82-year-old head of the Catholic Church was caught on video smacking a woman, and the internet was quick to give their opinion on the situation.

On Wednesday, Pope Francis was walking through St. Peter’s Square by a nearby nativity scene display in Vatican City and shaking hands with people in the crowd. One woman got a bit too handsy after the Pope passed her over. The religious believer grabbed onto the Pope’s hand and yanked the Vicar of Christ towards her. The Holy Father was visibly angry by the greeting, and the pissed-off pontiff slapped the woman’s hand to free himself from her grip.

WATCH: A woman grabbed Pope Francis toward her when he was greeting pilgrims at St. Peter's Square. The abrupt gesture appeared to cause him pain and the visibly disgruntled pope swiftly wrenched his hand free https://t.co/2nap3R0iQ4 pic.twitter.com/Rqx0qRvhh4

Imagine getting smacked by the Pope? THE POPE.

Hours after the incident, Pope Francis said he was sorry. “I apologize for the poor example yesterday,” Pope Francis said. “So many times we lose patience. Me, too,” he continued. “I say ‘excuse me’ for the bad example.”

The topic of the Pope’s New Year message was about violence against women. “Women are sources of life. Yet they are continually insulted, beaten, raped, forced to prostitute themselves and to suppress the life they bear in the womb,” Pope Francis told worshipers at St. Peter’s Basilica on Wednesday. “Every form of violence inflicted upon a woman is a blasphemy against God, who was born of a woman.”

Not everyone accepted the Pope’s apology, and the internet reacted with tweets condemning the papal leader.

Jesus: Turn the other cheek

For people defending the Pope… I guess I get it. Who could forget the passage in the Bible where crowds lined up for Jesus and when they touched him, he would angrily smack them and walk away quickly with a grimace on his face.

Yesterday, Pope Francis hit a woman's hand for grabbing him without his consent.

Today, he apologized "for the bad example given yesterday."

Where was this anger, visceral reaction, and swift response when priests and members of the clergy were abusing children? pic.twitter.com/7gQj2Ti6Fu

There were some people who defended Pope Francis.

The Pope giving lessons for 2020. Be kind, be generous. But PROTECT YOUR BOUNDARIES!!! pic.twitter.com/j0Ek17X7iZ

If you grab someone and yank them towards you like that, you deserve to get your hand smacked away. The people scolding Pope Francis for this are being ridiculous.

Seeing criticism of the Pope slapping a woman's hand after she almost yanked his arm of its socket from the kind of people who think being mocked on Twitter is one step down from assault.

Unsurprisingly, The Pope is a Sagittarius. Don’t test our patience…we don’t owe you anything. pic.twitter.com/5L4KYnPdww

This is probably the correct reaction to the Pope hitting the woman.

I see it both ways. You shouldn’t grab the Pope and pull him in the opposite direction he’s walking — at the same time, this is not uncommon and the Pope should’ve handled it differently.

Just as he should’ve handled a lot of other things differently…pic.twitter.com/pFtJ3UcjEm

Then there were the jokes.

Papalogist here. Grabbing Francis by the hand may seem like harmless fun but please remember that if you touch a pope his mother will reject him and abandon the nest.

Home girl was tryn to get her lottery ticket blessed! Pope wasn’t havin it. 2020 gon be a Muthafucka! 😐 https://t.co/mKYWgWlffS