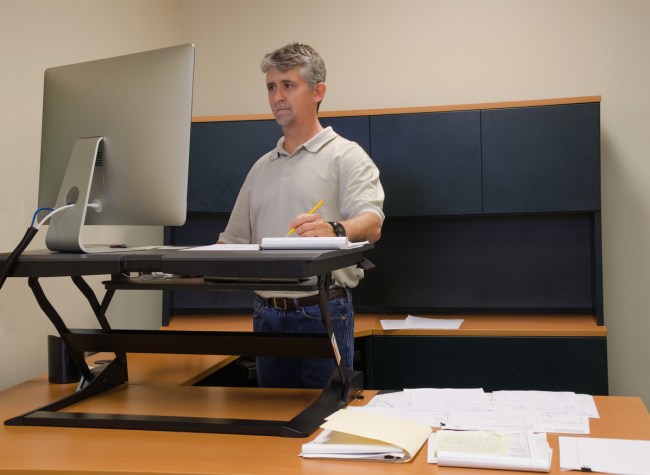 There is this toxic idea that’s growing legs in workplaces around America that “sitting is the new cancer.” I’ve actually heard someone say that in complete seriousness. Apple’s CEO Tim Cook mainstreamed this idea by equipping his thousands of employees with standing desks, just one of the many health perks in Apple’s $5 billion headquarters along with a 100,000-square-foot gym and a two-story yoga room.

Back in 2015, Cook cited doctors who say “standing is the new cancer.” He then announced the new Apple Watch feature that reminds you not to sit for too long.

Well, there has been a counter-movement to this idea for those who loathe standing. The only requirement is you must have no dignity,  zero fucks to give, and totally okay with looking like a human grasshopper.

These chairs can be worn anywhere and encourage good posture from the user pic.twitter.com/GJUB4BizkM

my god that chair looks incredibly comfy! so comfy that you wouldn't mind walking around like an insect, past benches and other accommodating resting places

Your boss when you show up at work wearing these pic.twitter.com/U35TevZfII

You forgot to mention that you look fucking stupid

Don’t try to lean back pic.twitter.com/yMXCt8LqCh

You guys know there are actual chairs out there

Society isn’t ready for the social stigma. That doesn’t invalidate the genius of the product.