After Fans Were Worried About Possible Drug Overdose, Post Malone Stops Concert To Say: ‘I’m Not On Drugs’ (Not Even Weed) 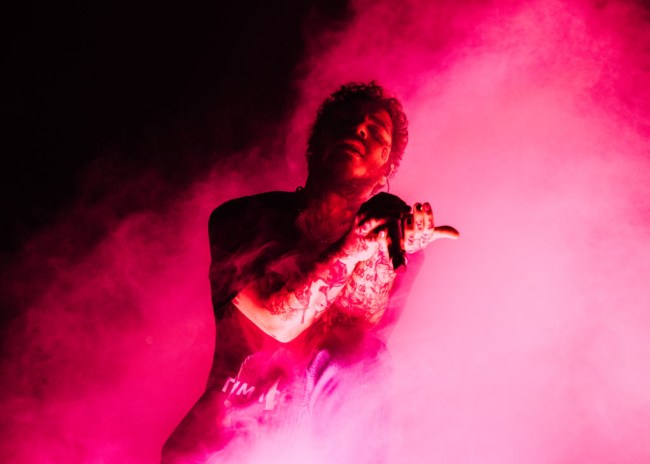 Over the past couple of days, music fans were worried about Post Malone. People pointed to several videos of the singer/rapper having bizarre behavior, and fans thought that Post Malone was abusing drugs and could suffer an overdose. Post Malone has gone on the record to say that he does not do any drugs.

Footage of Post Malone falling to the ground during a concert, his eyes rolling into the back of his head, slurring his words, smashing a guitar on stage, and overall strange behavior that could be construed merely as Post Malone being Post Malone.

idc if you’re a fan or not, post malone needs help. he’s clearly suffering with some sort of addiction, breaks my heart. pic.twitter.com/0oEDyJcNkr

everyone keeps talking about post malone not being okay and like 100% this man is going through it… can’t let another pass #PostMalone pic.twitter.com/hWkHNLmKsX

HE IS NOT OKAY. HE NEEDS HELP!
I don’t want to loose him. I don’t care if you are a fan of him or not, but he is fucking not ok! #PostMalone pic.twitter.com/wHgjqWllQa

So… y’all r saying this is normal for him? #PostMalone pic.twitter.com/wqu6cFnXiy

On Friday night, Post Malone addressed the accusations that he was spiraling out of control due to drug abuse by saying that he doesn’t do any drugs. “I’m not on drugs, and I feel the best I’ve ever fucking felt in my life,” Post said at his concert at the FedExForum in Memphis, Tennessee.

“And that’s why I can bust my ass for these shows, and fucking fall on the floor, and do all that fun shit,” Malone continued. “But for anyone that’s concerned here, I appreciate the love and the support, but I feel fucking fantastic, and I’m not doing drugs.”

“This has been one of the most fun tours we’ve been on. No one does drugs, no one is going nuts, everything is all good. He legit blew his nose during the space ghost Bigfoot video, which there’s like 40 Minutes more footage of. We just pass the time by making funny videos. The stage is made of grates, so you can see the light shine up, he caught his foot, and played it off. Then he always makes those faces during Rockstar has done it for the last 100 shows.”

Malone’s manager, Dre London, said: “Thanks for your concerns! I’m sure I would have let you know if something was wrong! Falling while performing I Fall Apart guys.”

Earlier this week, Post Malone gave an interview to GQ where he revealed that he doesn’t even smoke weed anymore.

“He says he quit smoking marijuana after a pot-induced anxiety attack that never completely subsided,” the article states. “He says that his diet has changed since then—he now likes to consume nothing stronger than alcohol. And, it sometimes seems, nothing weaker.”

Malone is currently on the U.S. leg of The Runaway Tour, which has 11 more shows in the states before heading to Europe for eight more concerts in support of his Hollywood’s Bleeding album.