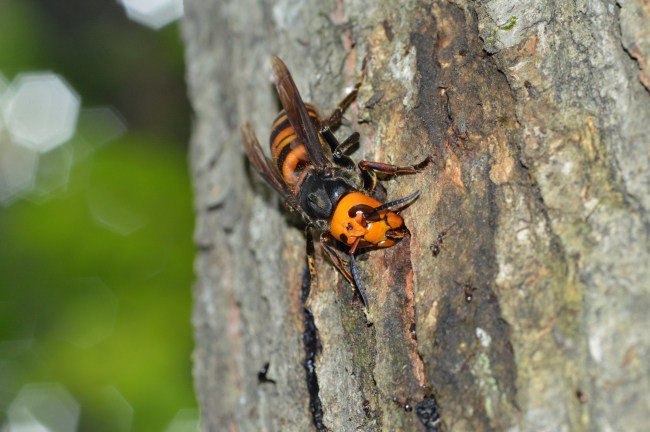 By now everyone has heard of the Japanese “murder hornets”, after a report from the NY Times over the weekend revealed they had made their way to the United States. for the first time.

With queens that can grow to two inches long, Asian giant hornets can use mandibles shaped like spiked shark fins to wipe out a honeybee hive in a matter of hours, decapitating the bees and flying away with the thoraxes to feed their young. For larger targets, the hornet’s potent venom and stinger — long enough to puncture a beekeeping suit — make for an excruciating combination that victims have likened to hot metal driving into their skin.

In Japan, the hornets kill up to 50 people a year. Now, for the first time, they have arrived in the United States.

While everyone is afraid of the giant Hornets they’re really no match against the praying mantis.

In a video making the rounds on Twitter, a praying mantis was pinned against one of the murder hornets and straight-up destroys the hornet in seconds by eating its head off.

(Warning video is a bit graphic)

Imagine not being able to stop your face from being eaten

I think I’m more afraid of a praying mantis than I am of a murder hornet at this point.