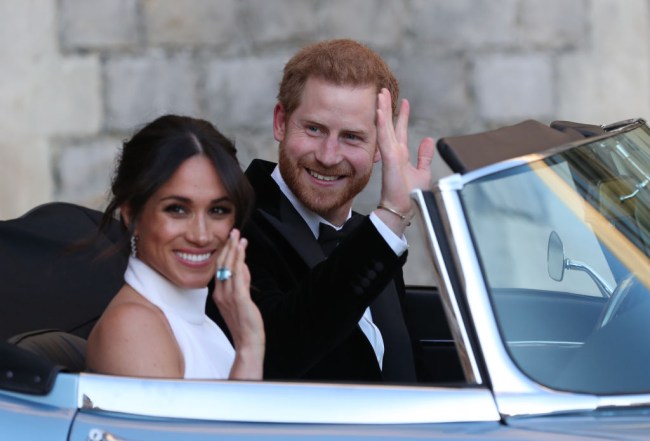 I’m not exactly sure how Prince Henry initially met Meghan Markle and I’m not going to bother to look it up, as I prefer to think the origin of their relationship can be traced back to the night the red-headed royal threw on an episode of Suits to scratch his legal drama itch and rang a bell to summon a butler who was instructed to track down the cute paralegal.

It’s either that or he saw her open a briefcase on Deal or No Deal. I’m equally amused by both of those scenarios.

Regardless of how their courtship actually began, the couple quickly took the world by storm and the media in Britain and beyond continued their timeless tradition of putting anyone with a remote connection to the royal family under a microscope and dissecting their every move.

There was a great deal of tut-tutting after Harry popped the question only 15 months after they first met each other and even more after they tied the knot thanks to the tendency of the Duchess of Sussex to give approximately zero shits about adhering to the royal protocol she’s expected to abide by.

Markle quickly discovered she’d signed herself up for a life filled with more scrutiny than she anticipated and got to experience the living hell that is having the scum of the earth who keep the  British tabloids running prying into every facet of your personal life in search of juicy drama and making shit up if they can’t discover something that strikes their fancy.

There have been rumblings concerning the couple’s discontent over the past few months, and on Wednesday, rumors began to swirl that they were planning on abdicating their royal duties and actually do what celebrities say they will whenever a Republican is elected president by absconding to Canada.

Now, in what people who are way too invested in the lives of the royal family claim is a virtually unprecedented move, the couple has confirmed the speculation by announcing they’ll be stepping away from their responsibilities and striking out on a life of their own, which means they’ll also have to rely on the royalties Meghan gets for having a role in Horrible Bosses by becoming financially independent.

A post shared by The Duke and Duchess of Sussex (@sussexroyal)

This is just the latest shake-up in recent months, as Prince Andrew also stepped into a reduced role after he attracted a great deal of media attention. However, his decision wasn’t as voluntary as Meghan and Henry’s, who haven’t been linked (at least not yet) to a man who mysteriously died in a prison he was sent to after being charged with running an international pedophile ring.

Based on initial reports, other members of the royal family weren’t exactly thrilled with their decision.

BREAKING. BBC Understands that no other member of the Royal Family was consulted before Harry and Meghan issued their personal statement tonight, the Palace is understood to be ‘disappointed’.

Thankfully, they can just keep saying “At least we’re not as bad as the suspected diddler” to make their reputation look shiny in comparison.