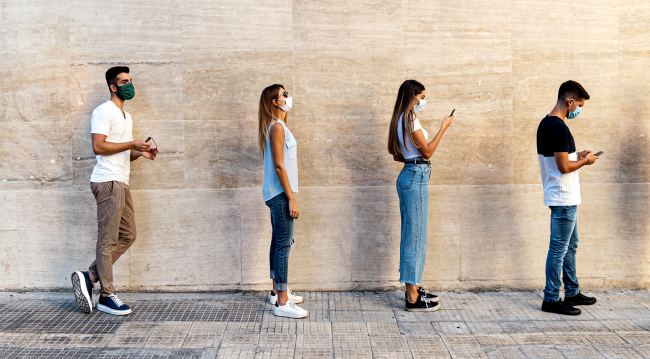 Of all the jobs that didn’t exist 100 years ago, being a professional queuer might one of the most surprising to have been created.

And it is a real thing that now exists. Because one man, Freddie Beckitt of London, England, says he makes up to £160 ($217) a day just standing in line for people who don’t want to do it.

Beckitt tells The Sun that after three years of being a professional queuer he’s got standing in line for others “down to a fine art by virtue of being a Londoner.”

The 31-year-old from Fulham, West London says most of his professional waiting has been to score tickets for highly sought-after events.

Freddie Beckitt, a professional queuer in London, charges £20 an hour by waiting in queue for people who don't want to

“I worked eight hours for a job queuing for the V&A’s Christian Dior exhibition for some very well-to-do people around their mid-sixties,” said Beckitt.

“The actual queuing was just three hours but they asked me to collect their tickets too and wait for them to arrive, so I just had hours perusing the V&A museum being paid £20 an hour, it was great!”

Summer is his busiest time, but there have been days where he has had to do his “work” in the freezing cold of winter.

“I also do seasonal and Christmas shopping queuing, but big events that people know about in advance, is normally when people think to book me in to save them time,” he said.

So who is paying Beckitt to stand in line for them? Just about everyone. He says his clients range from busy young families to senior citizens.

He got started when he saw a list of “random low-skilled jobs” on the web site Taskrabbit.

“I saw that thought it was easiest job in the world!

“Unfortunately I don’t think I can charge anymore than £20 an hour and it doesn’t require any skill or even hard work! But it gives me lots of flexibility to earn and fit it about my writing schedule.”