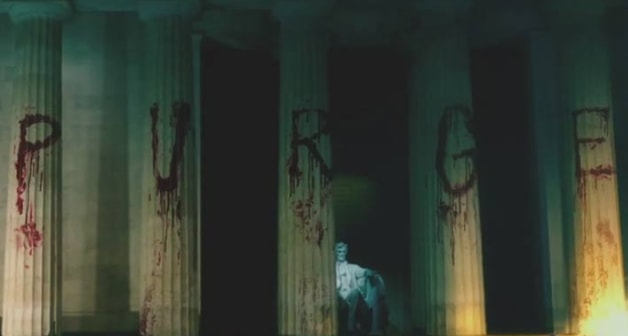 The next chapter of “The Purge” goes back to its origins. “The Purge 4” will be a prequel that is taking it way back to the very first Purge that went down on Staten Island. “Purge Island” will focus on the experimental anything goes lawless killing spree before it became an annual U.S. holiday called “Purge Night” where there is a 12-hour period where all crime, including murder, is legal. “Purge” writer James DeMonaco gave an interview to Vulture where he revealed some interesting insight into the next installment of the future dystopic America franchise.

It takes place on Staten Island which is cool — the first experimental Purge. Next July 4, it’ll be coming. Okay, let me think what I can give. I said it’s the first experimental Purge, which I don’t know if I was supposed to say, but now I’ve said it, so you have it. I was wondering how you get people to stay for the first Purge, and what they do is they start monetizing it. People from Staten Island can easily go to Brooklyn for the evening, so what they do is start promising very decent sums of money for the very poor people in the neighborhood. It becomes a monetization of murder and violence, incentivizing killing and keeping people around for them to be victims. So you see the inception of how grotesque the idea of the Purge is, the manipulation upon the society. That’s where it becomes, sadly, I think, very topical right now with the current administration — and also terrifying, because, as you said, no one’s prepared for what’s about to happen. In fact, some people don’t think anything’s going to happen and then there’s this great twist [regarding] how they manipulate the evening.

Sounds pretty fucking intense and people will not be ready for the slaughter and chaos that is about to descend upon them. DeMonaco believes “Purge Island” will be the “most crowd-pleasing” of the franchise. The film will feature an anti-hero and unlike previous versions of “The Purge” this one will have a singular hero. “This is one man’s journey, William, an anti-hero inspired by Eastwood in Unforgiven, so it’s this very cool, modern, kind of badass who redeems himself through the story.”

DeMonaco, who directed the previous three films, will step aside and give directing duties to Gerard McMurray, who produced “Burning Sands” and “Fruitvale Station.” The unnamed movie, which may have the title of “The Purge: The Island” slashes into theaters on July 4, 2018.