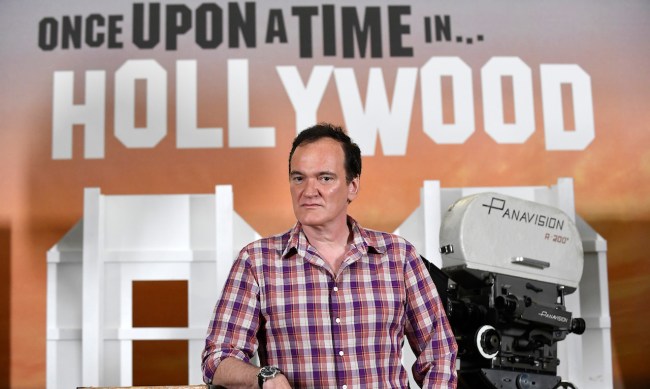 Outside of Martin Scorsese and Steven Spielberg, it can be legitimately argued that Quentin Tarantino is the most influential director of our lifetime.

With an essentially perfect filmography, Tarantino has almost created his own genre, as his variety of films — from Reservoir Dogs to Kill Bill to Once Upon A Time In Hollywood — are truly unlike any other in American pop culture.

If anyone knows how influential Tarantino truly is, it’s other directors, especially the young up-and-comers, who were raised on the Tarantinoverse.

36-year-old Greta Gerwig certainly qualifies as one of those directors, as she waxed lyrically about Tarantino when presenting him with an award last night.

While presenting Quentin Tarantino with the Director of the Year award at the 31st Annual Palm Springs International Film Festival Film Awards Gala, Greta Gerwig — the director of hit films such as Lady Bird and Little Women — brought the legendary director to tears with her impassioned speech.

“Quentin Tarantino makes movies as if movies could save the world,” she said. “Movies can kill Hitler, free slaves, and give Sharon Tate one more summer … he makes movies like movies themselves matter, like they are both high art — which they are — and that they are populist art — which they are. They’re speaking the most profound truths to the biggest crowds with the bravado that comes with the confidence that collectively everybody will be changed for the better by the experience,” Gerwig said in part. [via IndieWire]

According to IndieWire, “after listening to Gerwig’s heartfelt six-minute introduction, a welled-up Tarantino said he was on the verge of tears.”

“She literally said about me how I can only imagine somebody could ever talk about me in my wildest self-possessed dreams,” he said. “Thank you. I mean my god, thank you so much. I joke that when people are going to talk about me, I say, ‘Speak about me as if I were dead.’ And they never do. And you did!”

Having not been nominated for Best Picture since Pulp Fiction, Tarantino is expected to clean-up at the Academy Awards this year thanks to Once Upon A Time In Hollywood.