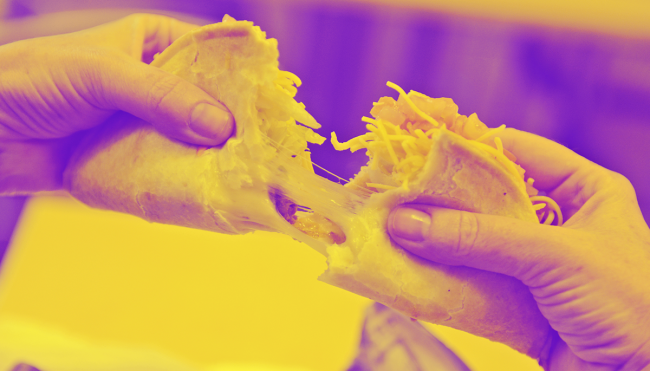 Last week, Taco Bell once again went out of its way to piss off its legion of loyal fans when it announced the Quesalupa would be disappearing from the menu just a couple of months after it made its grand return due to demand that apparently wasn’t as popular as the chain had hoped.

The quesadilla-chalupa mashup was originally discontinued in 2016. However, it resurfaced last year when Taco Bell used the city of Knoxville, Tennessee as a test market for a potential resurrection—a development that first came to my attention in October courtesy of Reddit user u/tmanowen, who hopped on a plane in the middle of a pandemic just to get his hands on one.

Plenty of people took to social media to express their displeasure with the Quesalupa falling victim to Cancel Culture, but when the news broke, I didn’t care about the opinion of anyone but the Taco Bell fan who embarked on a journey that rivals The Odyssey to scratch his itch.

I headed over to creep on his profile and see if he’d commented on the tragic development only to stumble headfirst down a rabbit hole after discovering how he’d decided to celebrate the item’s all-too-brief return: by channeling his inner Morgan Spurlock and subsisting entirely on Taco Bell for a full month for a project dubbed Quesalupa Me.

The anonymous Redditor (who I’m going to refer to as “TMan” from here on out) originally posted about his plans toward the end of April when he threw up a thread listing the rules he’d established for himself, which read:

I couldn’t help but slide in TMan’s DMs in the hopes he’d be able to shed some light on his Taco Bell fandom and his decision to commit to Quesalupa Me, which he officially wrapped up over the weekend (he’ll be getting a blood test to gauge the impact it had on his health and plans to share the results when they come back).

Thankfully, he was kind enough to respond to answer some questions I sent his way.

Have you always been a big fan of Taco Bell? What are the origins of your Taco Bell fandom)?

I wasn’t exposed to Taco Bell as a kid and didn’t have it for the first time until I was about 12 years old. I’d maybe had it only a dozen times before college. The first item I ever tried (which I still love to this day) was the Cheesy Gordita Crunch.

My fandom really started in my early college years when my friend worked at Taco Bell. Whenever I was visiting home or back during the summer, I’d often spend my time at Taco Bell to hang out with my friend. When he wasn’t working, we’d still go there to hang out.

Can I ask how much you paid to fly to North Carolina?

Can you articulate why you have such a special relationship with the Quesalupa?

The Quesalupa just syncs with my soul. Every time I eat one, I get a warm feeling like everything is great; just a euphoric feeling after my first bite of each one.

My favorite permanent item on Taco Bell’s menu is the Cheesy Gordita Crunch, and the Quesalupa is basically just a better Cheesy Gordita Crunch. The fried shell allows you to still get the crunch of a Gordita while remaining a double soft taco. I’ve always been a big fan of pepper jack cheese. too.

The fried cheesy goodness of a fresh one (right out of the frier) is a literal orgasmic taste and is still my favorite food to this date.

Do you feel betrayed Taco Bell discontinued the Quesalupa?

The Quesalupa wasn’t technically taken off the menu until last week when it was properly discontinued, but the issue was that Taco Bell did not do continuous shipments to stores for the shells.

They did one big shipment at the start of Q2, and then stores weren’t given any more, so when they ran out, they ran out (this is at least my understanding of it). My store was especially bad because I had ordered easily 100+ so my store’s shell count was much lower than most others.

I definitely felt a bit betrayed that they were discontinued/not supplied by the correct date. I was planning on doing a full 30 days of Quesalupas (the last couple would be reheated), but instead, I had to finish the second half of the challenge with Taco Bell- only items as voted on by my viewers.

What was the inspiration for Quesalupa Me?

Quesalupa Me was mostly just a way to prove to people that I’m for real. There were some skeptics when it came to the story and posts that I have made regarding it, so I wanted to give people something to reference to show that I really do love the Quesalupa.

Also, when it came out again this March, I ate them for every meal for about 5 days straight so I assumed I could do a month.

What’s been the hardest part?

The exercise. Second to exercise has been the food cravings.

Have you discovered the ideal Quesalupa order?

This (should) fill up a regular person and are by far the two best combinations. Unfortunately, the Quesalupa is gone for now, but people will know for the next time it comes around.

What’s the most Quesalupas you’ve ever eaten in a single sitting?

So there’s a bit of misunderstanding surrounding this, based on a post I made after I ordered 28 Quesalupas. I didn’t actually eat all of them in that sitting.

Do you have a preferred sauce?

A cup of water.

If you could pick one other discontinued Taco Bell item to resurrect, what would it be?

If I had to choose something other than the Quesalupa, I’d go with either the Cool Ranch Doritos Locos Taco or the Beefy Nacho Loaded Griller.

Some replies have been edited for clarity.