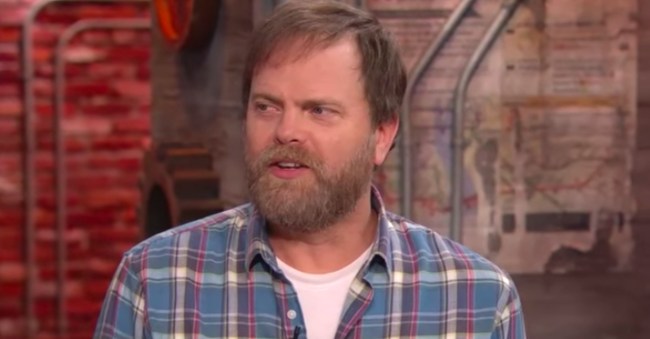 Disliking Pam from The Office is like disliking videos of puppies playing in kiddie pools or soldiers reuniting with family members. We’ve accepted the Dunder Mifflin receptionist as the moral compass of the show, the well-intentioned, under-appreciated character whose heart is warmer than Phyllis’ chair cushion.

But have we let Pam’s bright smile and cheery disposition mask her true self? Is Pamela Morgan Beesly a wolf in a a cardigan?

ESPN personality Ryen Russilo offered a convincing character assessment of Pam that went viral a few months back. It will make you reconsider everything you hold true.

Pam…
Cheated on Roy
Led Jim on for years
Jealous of Katy
Back w/ Roy but awkward about Karen
Lied to coworkers and management about Office Administrator position
Jim supported her dream, she asked him to give up on his
Harrassed Danny
Had emotional connection w/ camera man…

Couldn't accept that her mother and Michael were happy together

Rainn Wilson aka Dwight Shrute appeared on ESPN morning show Get Up! this morning and talked about everything from his beloved Seahawks to the Russilo’s Pam conspiracy theory to his favorite Office episode.

Rainn to Russillo on Pam:

“You are a horrible human being. What do you do in your life? What are you at home watching — what other conspiracy theories do you have? … Don’t be a Pam. Be a Dwight, girls. I think it’s a fantastic theory. You know what? I’m going to explore this a little bit more.”

Rainn on his favorite office episode: when Jim is at Schrute Farms and comes painfully close to connecting with Dwight.

“There’s a beautiful moment when Dwight is heartbroken because Angela has left him, and they’re sitting in the stairwell — him and Jim — and Jim offers him some consolation. And then Dwight reaches out. He’s kind of in tears, and he reaches out and he puts his arm out like he’s going to grab Jim. But then he looks and Jim is gone, and Dwight looks around and he’s kind of embarrassed.

“And I love that moment because it kind of sums up The Officefor me because if Dwight had connected with Jim, if Dwight had put his arm around Jim and they had like looked into each other’s eyes and said, ‘I gotcha, bro. I’m here for you,’ and they had a bro moment, then the whole show would have fallen apart because they need to be antagonists. But it was this beautiful, poignant moment that ends kind of comedically.”

I’m actually still trying to get over Dwight Schrute wearing a hipster button down and rocking a lumberjack beard. Am I in the upside down?