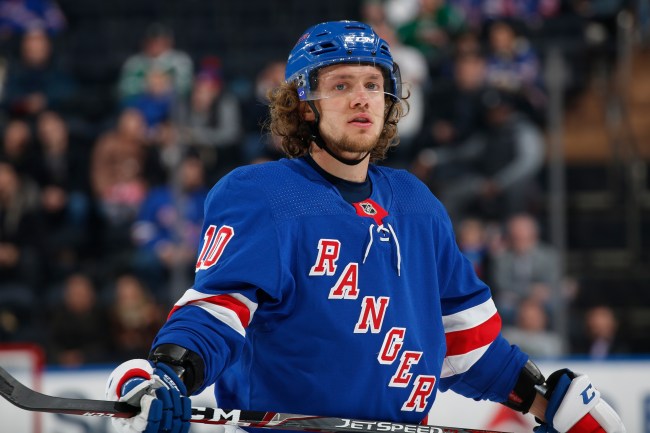 A couple weeks ago, NY Rangers star Artemi Panarin was accused of abusing an 18-year-old girl by his former KHL hockey coach, Andrei Nazarov. Panarin took a leave of absence, and he is now returning to the lineup with the full support of the Rangers organization behind him:

Say it with us:

Artemi Panarin was back with the Rangers Wednesday afternoon after a 2 1/2-week long absence in wake of a politically-motivated article from Russia that accused the star winger of assaulting an 18-year-old Latvian woman in 2011.

He has missed the last eight games since requesting a leave of absence from the team following the discredited allegations levied against him by his former KHL coach Andrei Nazarov.

Panarin and the Rangers vehemently denied the accusations, which were made shortly after the 29-year-old offered up his support of Russian opposition leader Alexei Navalny. Nazarov is a well-documented supporter of current Russian president Vladimir Putin and has repeatedly spoken out against Panarin’s political stance.

First, Artemi taking some time off is completely understandable. Russians who live in the west and speak out against the Putin regime haven’t exactly fared well historically. For more on this, read Heidi Blake’s searing exposé From Russia With Blood, about Putin’s killing program that targeted the oligarchs who had dirt on him. Great book.

Panarin has been outspoken in his support of Russian opposition leader Alexei Navalny, whom you may recall was poisoned with Novichok this summer. Once Navalny recovered and returned to Russia, he was promptly arrested and sentenced to prison on complete nonsense charges. Needless to say, Navalny, and really any Russian national who voices their support for him, is taking a courageous risk.

Which is why I admire Artemi Panarin even more. It’s hard enough to be 29-years-old, living in a foreign country across the world, and dominating a league at the highest level of your sport (in the least forgiving sports market there is, New York City, no less). But to do all that while also standing up for what you believe in regarding your nation’s corrupt political system, knowing full-well that you stand to get some serious backlash?

I call that heroic.

At a time when American athletes have decidedly refused to “shut up and dribble,” it’s been amazing to see some foreign athletes do the same. Similar to Panarin, Enes Kanter received death threats after drawing the ire of Turkish president Recep Erdogan.

From meetings with the FBI to being forced to live in a hotel room the ENTIRE SEASON, this is the price of courage.

Best of luck to Artemi Panarin the rest of the season. The world needs more athletes like him.